With pleasure we launch the first tranche of Culture Days for 2021. They used to be called London Days, but, for the first time, we extend beyond the confines of the capital to places where the lecturers live or work, or which are special subjects of their study.

Anticipating that mitigation measures will continue well into next year, most of the days are largely outdoors. If we cannot go ahead with a Day, we will give you a choice between an immediate refund or a transfer to later departure.

Whitehall is shorthand for the civil service, for political life and the mechanics of government. It is also, of course, a street, and together with adjacent precincts it comprises the most historically significant half mile in England. And there is an architectural legacy to match. The buildings form the principal focus of the day, though a light dusting of historical reference and political anecdote acknowledges that the history of the nation is woven into their fabric.

Bath was a spa town in Roman times, but it was in the 18th century that a succession of architects and entrepreneurs created one of the supreme achievements of European architecture and urban design. The grandeur of Ancient Rome was adapted to satisfy the taste and desires of the Georgian aristocracy and merchant classes. The city owes much of its character to its topography – a riverside site and a bowl of limestone hills from which the honey-coloured stone was quarried.

From the great and the good to the mad and the bad, via inventors, composers, authors, soldiers, statesmen and the merely eccentric, English and British history is commemorated in the memorials to those who made it. This gentle walk in the vicinity of Whitehall examines that history through the biographies of these individuals, while mindful of the context in which particular values and accomplishments were thought worthy of the honour of a public statue. Our lecturer is a historian, author and broadcaster.

The London Backstreet Walk – from Hyde Park Corner to the Tower

This walk from Hyde Park Corner to the Tower of London shows what is widely believed but rarely tested, that the centre of the city is perfectly walkable. The route chosen, however, is special – almost exclusively through backstreets, parks, alleys, gardens and pedestrian zones. This produces many delights and surprises: famous monuments and unexpected clusters of ancient buildings, picturesque vistas and labyrinthine alleys, recent architectural behemoths and medieval street patterns.

Outdoor Oxford – growth of a city

‘Towery city, and branchy between towers… lark charmed, rook racked, river rounded’: Oxford has never been better characterised than by Gerald Manley Hopkins. This day explores the very particular urban topography made by the rivers, their flood plains and crossing points, and a dense medieval core with expansion largely in two directions only. From St Giles and Broad Street, through the narrow lanes east of the High Street down to Christ Church Meadow, the day concludes with a walk along the Thames to Oxford’s tiny medieval neighbour at Iffley.

‘Folkestone is an Art School’ proclaims an artwork at the station, but it’s more: it’s a treasury of outdoor contemporary art scattered through the town and along the coast, sometimes hidden, sometimes half-concealed by the rising tide. On this walk you see works by Banksy, Mark Wallinger, Anthony Gormley, Tracey Emin, Cornelia Parker, Ian Hamilton Finlay and others – about thirty altogether. Many are entwined with the town’s history – or you can take them at face value and enjoy all the debate that modern art can inspire.

The London Backstreet Walk has been the most popular of our Culture Days since its launch ten years ago. It has taken years of intermittent research and exploration to find another route the equal of the first in interest, beauty and sense of discovery. This is a day of alleys, byways, unexpected hidden corners, minor architectural masterpieces, glimpses of famous places and not a few surprises – altogether a relentlessly fascinating and enjoyable day. Eight hours, eight miles, several refreshment stops.

London is the greenest city in Europe: 40% of its area is parkland and gardens. While the great parks are known and loved by Londoners and visitors alike, few people have seen the many small and remarkable gardens that are dotted through the City. With a history spanning five centuries, this walk encompasses choice examples old and new, some by special arrangement, stretching from Nigel Dunnett’s recent planting at the Barbican to Piet Oudolf’s work on the South Bank at Potter’s Field.

Exeter’s History – from Roman Fortress to the Present, 6 May 2021

London Organs Day – outstanding instruments in the City and West End, 14 May 2021

Cardiff on Foot – highlights of the Welsh capital, 9 June 2021

'These London Days are really memorable, unique and often unforgettable experiences. I have learned and enjoyed the day so much.'

'I love the fact that one comes away from a Martin Randall tour with new knowledge and experiences. It was so encouraging that you were able to run this London Day and I really hope that things start to get a little better. Having finally found MRT, I'd hate to lose you – you've certainly enriched my life.'

'MRT's London Days are invariably full of interest, even for those who think they know quite a lot about the city. It is very telling that so many of the participants are Londoners! There was not much on today's trip that I already knew.' 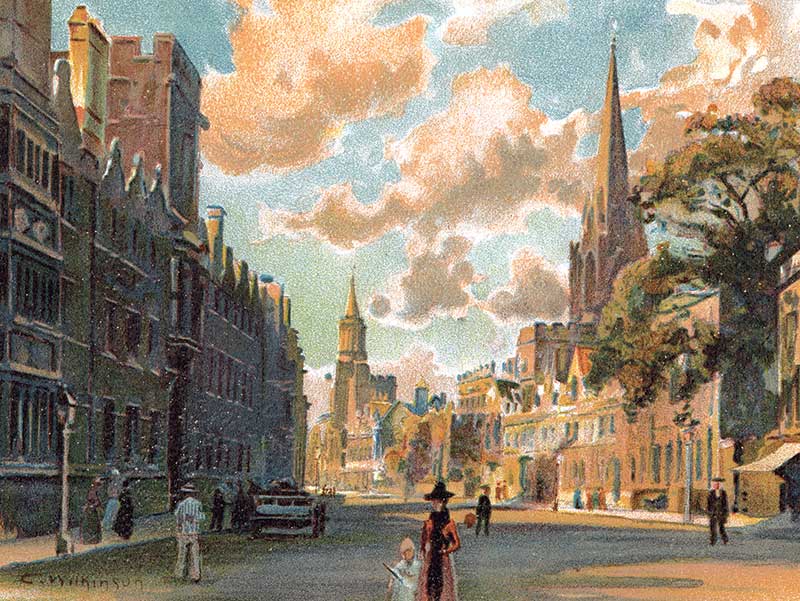