In Michael’s second series, more emphasis will be placed on the contribution of artists from ‘Northern’ (beyond Italy) Europe to the Renaissance. The theme is the same: famous works of art and architecture that remain stubbornly mysterious, both in the sense that they continue to present unsolved problems to the art historian, but also in that they were never intended by their makers, or understood by their original audiences, to have one meaning only, whether straightforward or recondite.

Some of these works deliberately challenge the viewer with esoteric subject matter and subtle clues which require careful decoding, others are just inherently ambiguous, open to different, indeed opposing, interpretations. All raise perplexities of historical context and function which have not been, and perhaps never can be, conclusively unravelled. This lack of resolution gives rise to their ongoing fascination for us, and is also a source of their everlasting beauty.

They take place every Tuesday from 8 June to 13 July at 4.30pm GMT+1 (11.30am EDT) and, including Q&A, will probably last just under an hour. They are available for viewing for eight weeks after the last episode is streamed (7 September).

Netherlandish painters of the status of Jan van Eyck were as admired across Europe in the fifteenth century as any of their Italian counterparts, largely because of their sophisticated use of the oil medium. They also set the template for the diffusion of private portraiture. This North-South transfer of cultural capital is well illustrated in the portrait of a man and a woman painted by Van Eyck in 1434. He is probably Giovanni Arnolfini, an Italian merchant from Lucca then resident in Bruges and who supplied the court of Philip the Good with luxury textiles. What occasioned the commission of this work and is the room in which the couple stand full of hidden clues, or not?

Rome witnessed a cultural renewal after the return of the popes from Avignon in 1420. Urban projects were instigated to reverse the impression on pilgrims and other visitors of a squalid medieval village nestled among ancient ruins. Pope Julius II (1503-13) appointed Julius II to rebuild Old St. Peter’s on an imperial Roman scale. A much smaller project of Bramante’s was a domed shrine marking the site of St. Peter’s martyrdom on the Janiculum Hill. It too was never completed to his designs but nonetheless had a huge impact on the future history of classical architecture in Europe and America. How and why did it (almost immediately) achieve this classic status?

Few paintings are as enigmatic as Giorgione’s ‘Three Philosophers’, and few figures in the western canon of artists remain as elusive as Giorgione. He worked for a select circle of noble patrons in Venice and created a new genre of cabinet picture for the learned connoisseur. This picture was described in 1525 as ‘Three philosophers in a landscape’, but who are these ‘philosophers’ and what do they represent? What is the seated young man measuring, is the one in the middle from the East, and what is the celestial chart held by the old man? Why does a rocky outcrop occupy nearly half the picture? Is this a narrative or an allegory?

4. Albrecht Dürer’s ‘Melencolia I’: allegory of the artist as genius (29th June)

Albrecht Dürer was the first German artist to acquire truly pan-European status. This he largely achieved through his prints, which had a very wide circulation and influence. Trained as a goldsmith, Dürer took the medium of engraving to a new level of technical perfection. The mysteriously titled ‘Melencolia I’ (1514) is remarkable not just for its formal brilliance but also for the depth and complexity of its subject matter, a dream-like assemblage of disparate items from a sleeping dog to a mill stone. What do they signify and who is the brooding, winged figure seated in their midst? Is she a personification of Geometry, Melancholy, or even of the artist himself?

Donatello was the most inventive sculptor of the early Renaissance in Florence. Cosimo de’ Medici the Elder commissioned him to make a bronze ‘David’ for the courtyard of his new palace. It had a republican inscription on its base and so can be placed in the Florentine tradition of Davids leading up to Michelangelo’s colossus once outside the Palazzo Vecchio. Yet there is something fundamentally unheroic and slyly androgynous about Donatello’s diminutive ephebe. Emulating ancient sculpture in its idealisation of adolescent male beauty, this nude is more languorous in posture and unathletic in physique than its classical antecedents. Why is this statue so different from his earlier, marble version?

Typical of the international character of Renaissance art, Hans Holbein was born and trained in Augsburg in Germany, worked in Switzerland, and ended up as court painter to King Henry VIII of England. He painted this large portrait of two Frenchmen, Jean de Dinteville and his friend Bishop Georges de Selve, most likely on an embassy from the King of France in 1533. Between them is depicted a two-tier table laden with scientific paraphernalia, books and musical instruments. On the floor is what appears at first sight to be an unintelligible shape, which turns out to be a skull, if viewed obliquely. What do these features tell us about the picture’s meaning and the purpose of the diplomatic mission it commemorated? 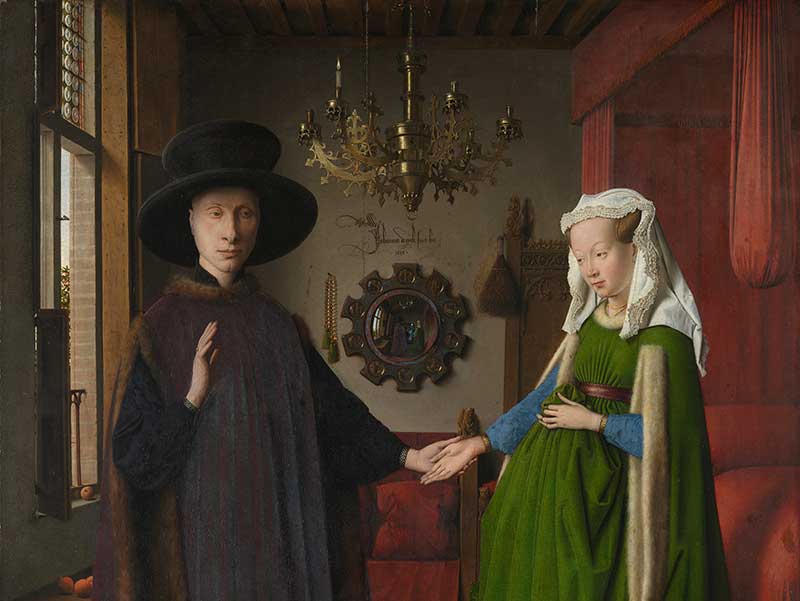