This summer, Dr Thomas-Leo True is leading a tour that explores The Duchy of Urbino (2–8 June 2018) – a region with a particularly personal significance to him. Here he describes some of its highlights.

On this tour, we criss-cross the old Duchy of Urbino from the Adriatic hinterland, glittering with art and architecture influenced by Venice, to rolling sub-Apennine hills crested with idyllic sandstone settlements. The region contains some of the most beautiful towns in Italy – not least Gubbio, San Leo, and, of course, Urbino itself. But it also holds the key to understanding the history of power, court and culture in Renaissance Italy.

In the lands of the Lords of Urbino, whose income from mercenary activity was astonishing, fragile alliances were forged that held the five great states of Italy in balance. But the iron of war was transformed by chisel, pen and brush into gold. Castiglione, the most flamboyant of Renaissance courtiers, called the Ducal Palace at Urbino ‘the most beautiful in all Italy’. In and around the palace are landscapes made of inlaid wood, masterpieces by Piero della Francesca, dazzling marbles, ship’s keel ceilings, undiscovered late mediaeval fresco cycles, and the house where the young Raphael matured. The city of Urbino.

We will see fortresses by Francesco di Giorgio, the most imaginative military architect who ever lived (whose ingenious secrets were guarded like sensitive nuclear equipment). These extraordinary structures – including a unique turtle-shaped bastion where a mysterious, shadowy ‘Prince of Astrology’ once lurked – are studded across the most stunning landscape on the Italian peninsula (for an example, see the spectacular Forte di San Leo in the featured image). For me, this is a voyage of the heart, to the region where I grew up.

Dr Thomas-Leo True is an art historian specialising in Renaissance and Baroque architecture in Rome and the Papal States, and Assistant Director of the British School at Rome from September 2015. He received his doctorate from Cambridge University, and also studied at the British School at Rome, where he was Rome Scholar (2009–10) and Giles Worsley Fellow (2013). He has lived in Le Marche region of Italy and is currently writing his first book on the Marchigian Cardinals of Pope Sixtus V.

View itinerary for The Duchy of Urbino 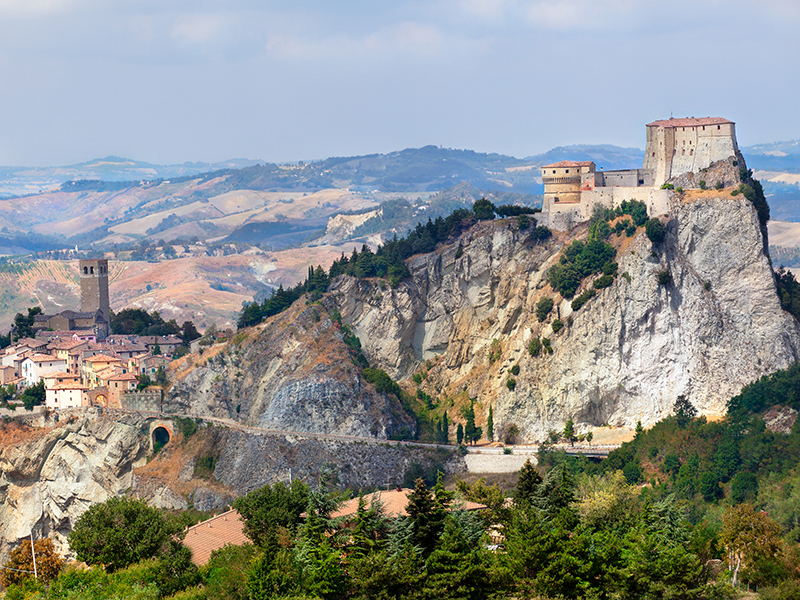