The finest country houses and gardens in northern England, from medieval to Victorian, with an emphasis on the eighteenth century.

All aspects of the country house are studied – architecture, furniture, decoration, works of art; gardens and parks; historical context and daily life; conservation and custodianship.

Unrushed: there is plenty of time to rest, relax and absorb. Only two hotel changes.

Some of the most glorious countryside in England, plus a few items other than houses.

The country house is England’s most distinctive contribution to the world’s cultural heritage. Other countries have aristocratic residences of course, but none in such profusion, such variety, and in such a state of completion and preservation.

A first-rate country house is more than a house. Clustering around are gardens, auxiliary buildings and a park, and beyond lie working farms and enterprises of all sorts. Inside, there are furnishings and works of art and gadgets and utensils and curios: in many of the houses on this tour these moveables are of a quality and a quantity which surpass the collections of all but a couple of dozen of England’s museums.

Why is England the locus classicus of the country house? Wealth is a precondition of their erection in the first place, and by and large there was a sufficiency; geography has been kind in allowing agricultural prosperity, and Britain’s primacy in trade and industry fed into stately piles. Relative peace and absence of foreign occupation, preference for primogeniture, a reluctance to revolt, a fruitful balance between the power of the monarch and the rights of the nobles: all these have been factors in the creation and maintenance of country house culture. Most of the houses on this tour have been in the same family for several generations.

One feature of the English country house is that it usually resides in the country; on the Continent the town often presses around the forecourt. Some of the countryside through which this tour passes has a bleak and rugged beauty – the moorland of the Peak District and the uplands of Northumberland. But most is gently rolling farmland with green fields, ancient hedges, majestic trees and contented livestock, far from urban sprawl and seemingly remote in time. Many of the houses have brilliant gardens; space precludes mentioning them all below, but there is usually plenty of time for enjoying them.

The leisurely pace of the tour is a distinctive feature. Time is allowed for relaxing and reflecting and exploring on ones own. Special arrangements comprise another significant feature, including out-of-hours opening and access to parts not normally seen by visitors.

Kedleston (Derbys). The coach leaves Derby railway station at 1.45pm. One of the supreme monuments of Classical architecture and decoration in England, recreating the glories of Ancient Rome in the foothills of the Peak District, Kedleston Hall (1759–65) was the creation of Sir Nathaniel Curzon and, initially, three architects, of whom Robert Adam emerged the victor. The sequence of grand rooms for entertainment and show are homogeneous and complete (with furnishings designed by Adam), an impeccable manifestation of aristocratic wealth, education and taste. Spend the first of three nights near Chatsworth.

Chatsworth, Haddon (Derbys). The home of the Duke of Devonshire, Chatsworth House was rebuilt in the 1690s with the scale and sumptuousness of a palace and further augmented in the 1820s. The steady acquisition of fine furniture, sculpture and pictures created one of the finest private art collections in the world. ‘The most perfect English house to survive from the Middle Ages’, Haddon Hall evolved from c. 1370 to the 17th century after which nearly 300 years of disuse preserved it from alteration. The gardens are exceptionally lovely.

Hardwick, Bolsover (Derbys). Hardwick Hall (1590) is the finest of all Elizabethan great houses, a highpoint of the English Renaissance, the façade famously more glass than stone. The unaltered interiors are decorated with stucco reliefs and filled with contemporary textiles and furniture. Bolsover Castle is an elaborate Jacobean folly, a splendid late-Renaissance sequence of rooms in medieval fancy dress.

Wentworth Woodhouse (S Yorks), Harewood (W Yorks). Wentworth Woodhouse is the largest private house in England and among the most magnificent. Despite a complex building history, it is essentially 18th-century Palladian. Afflicted by existential threats for 70 years, its future and access to the public were secured only in 2017.  Harewood House is one of the grandest and most beautiful of English country houses, architecture by John Carr (1772) and Charles Barry (1843), interiors by Adam, furniture by Chippendale and park by ‘Capability’ Brown. There are excellent paintings, Italian Renaissance to modern. First of three nights in York.

Burton Agnes (E Yorks), Castle Howard (N Yorks). Burton Agnes Hall is a final flourish of the Elizabethan age, red brick and cream stone, topiary, marvellous carving and plasterwork, Impressionist and modern paintings: ‘the perfect English house’. Designed by John Vanbrugh in 1699, Castle Howard is one of the few major Baroque buildings in England and the most palatial house on the tour. Excellent works of art and park with famous temples and follies.

Markenfield Hall (N Yorks). The best surviving medieval moated manor house in England, with parts dating to c. 1290 and crenellations licensed in 1310, Markenfield Hall has charm beyond words. It is a textbook case of how a family-owned historic property can flourish, given energy, imagination and love. Some free time in York.

Raby, Bishop Auckland (Co. Durham). Within the formidable 14th-century fortifications of Raby Castle are suites of rooms of the 18th and 19th centuries. There are good paintings, furniture and Meissen animals and a deer park. One of the best preserved episcopal palaces in Europe, and home to Francisco de Zurbarán’s Jacob and His Twelve Sons. First of two nights in Newcastle.

Belsay, Cragside (Nthumb). After Sir Charles Monck’s return from Greece in 1805 he built Belsay Hall in a severely Grecian style. Delightful woodland gardens lead to a medieval castle. A wonderful sequence of late-Victorian taste and technology, Cragside is a romantic Tudor-style pile (1869–84) designed by Norman Shaw for William Armstrong, inventor and manufacturer.

Alnwick (Nthumb), Newcastle. Since 1309 the seat of the Percys, Dukes of Northumberland, Alnwick Castle externally remains a striking medieval fortress while the interiors are a lavish exercise in Victorian medievalism. There is a superb painting collection and a new 12-acre garden. The coach takes you to Newcastle railway station by 3.30pm. 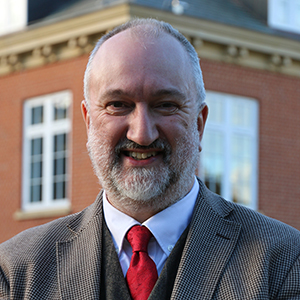 Lecturer in architectural history at the Department for Continuing Education, Oxford University. Steven has worked as a senior manager and CEO in the heritage, arts and education sectors for over 30 years. His former roles include Deputy Director at Yale University’s Paul Mellon Centre for Studies in British Art in London, Dean of Arts, Humanities and Architecture at the University of Plymouth, and Director/Chief Executive at Compton Verney Art Gallery and Park in Warwickshire. He is the author of Adam Style (1992), George IV: The Grand Entertainment (2001), Interiors: The Home Since 1700 (2008) and The Comfort of the Past: Building Oxford and Beyond 1815–2015 (2015), among others.

Travel by private coach; hotel accommodation as described below; breakfasts; 6 dinners with wine, water, coffee; all admissions; all tips; all taxes; the services of the lecturer and tour manager.

The Cavendish Hotel, near Chatsworth: located on the Chatsworth Estate it has been an inn for centuries. The Grand, York: the former headquarters of North Eastern Railway, the hotel retains many original features. Jesmond Dene House, Newcastle: 19th-century mansion in a quiet wooded suburb. Single rooms throughout are double for sole use.

Unavoidably there is quite a lot of walking on this tour and it would not be suitable for anyone with difficulties with everyday walking and stair-climbing. Coaches can rarely park near the houses, many of the parks and gardens are extensive, the houses visited don’t have lifts (nor do all the hotels).Average distance by coach per day: c. 55 miles.

National Trust: members (with cards) will be refunded c. £49. 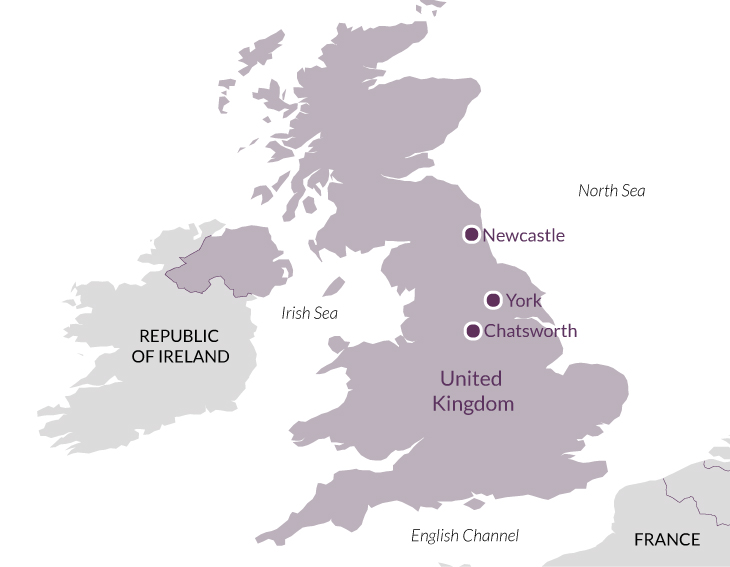 'A brilliant itinerary with a wide range of houses and styles.'

'The itinerary was excellent. The combination of magnificent aristocratic houses and smaller houses made the tour very interesting.'

'The inclusion of houses from so many different periods greatly enhanced the tour.'

'This tour was exactly what we wanted to see and do. We saw a beautiful part of England and some of the most important Great Houses.'