Architectural historian John McNeill accompanied our latest Opera in Sicily festival, to lead walking tours of the region. Here he describes the appeal of participating in this joyful event.

Opera in Southern Sicily. Would I like to be involved? Not in the opera, obviously – but could I take a few walking tours, talk about the art and architecture of Ortygia, Modica, Noto, mainland Siracusa? ‘The only pause for reflection is to question the dates.

For an architectural historian with an interest in music, Martin Randall Festivals are a joy. Carrying no more than the lightest of ‘task-lists’ (check toilets at end of interval, tier 2), you get Così fan tutte in the Teatro Comunale on Ortygia, followed by dinner in the archbishop’s palace. There is an extraordinary cast list – of clients, musicians, office staff, a couple of fellow lecturers – endless opportunities for distraction and conversation. And then there are the walking tours for which you were invited in the first place. Another joy. Impossible to imagine you would rather be anywhere other than the Castello Maniace at sunset on Tuesday, 5th November. Or on the roof of Santa Chiara in Noto the following morning.

This part of Sicily, known to geologists as the Hyblaean foreland, is famed for its ravines, underground rivers, fine building stones, and earthquakes. Combined with a position at the centre of the Mediterranean, they have given rise to one of the most enthralling clusters of towns in Europe. It really is a privilege to be able to revisit this corner of Sicily and come better to understand its architectural character. With or without the music, it really shouldn’t be missed. 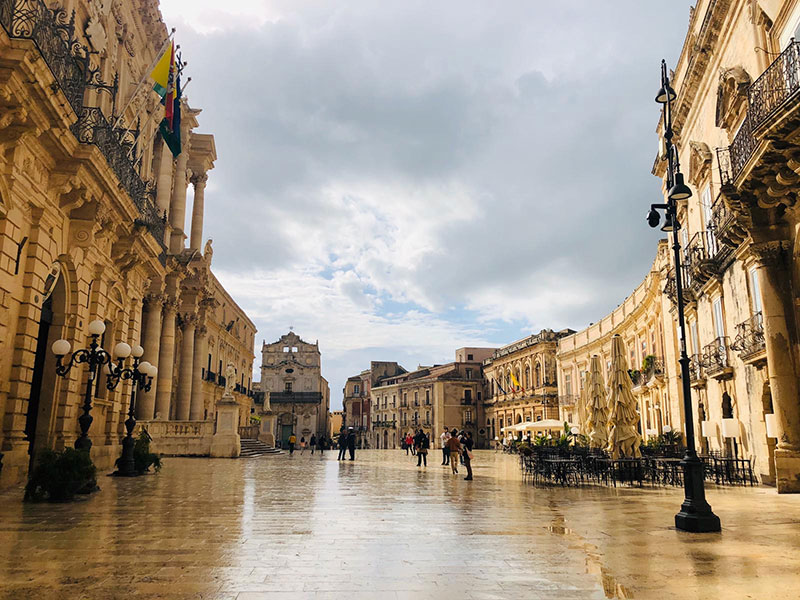