Moving on: Architecture & Memory - Bauhaus to the present in Stuttgart, Ulm and Munich

Traces Modernist and modern architecture in southern Germany, Bauhaus to the present.

Examines a rich variety of buildings in three of the wealthiest cities in Germany.

Investigates the impact of politics and ideology, and of destruction and reconstruction, on design and city planning.

Based in the state capitals of Stuttgart and Munich, each major centres for art, architecture, culture and politics.

This tour celebrates great architecture of the twentieth and twenty-first centuries in the south of Germany. It contains variety and beauty enough to sustain a richly fulfilling seven-day itinerary, but it has been designed to go beyond aesthetics and technology and to explore the divergent strands of ideology and ethos which formed the context for architectural endeavour.

No other European country has in the last hundred years experienced the same degree of turbulence and reversal of fortune. None has seen a comparable level of innovation and original thought, in all spheres – and of reaction and antagonism to novelty.

The optimism and utopian spirit in the aftermath of the First World War was universal, but in Germany the search for radical solutions was more intense and more mainstream – and more violently opposed. The Bauhaus, worldwide the most influential art school of the last century, and the Deutscher Werkbund were both incubators of the modernism we now see all around us. Both were snuffed out, ideologically and physically, by National Socialism, which imposed an orthodoxy of aggressive Neo-Classicism – a style which may repulse but is not entirely without merit.

Postwar Germany saw a re-emergence of dynamic modernism in building projects that rose, quite literally, from the ruins. Democratic design principles, avoidance of monumentalism, openness and lightness increasingly informed architecture and design in the 1950s and 1960s. This spirit was exemplified by the Ulm School of Design, which renewed, carried and furthered Bauhaus ideals. This trend reached its culmination in the groundbreaking solutions created for the 1972 Munich Olympics.

The states of Baden-Württemberg and Bavaria are Germany’s wealthiest regions, and here government, businesses and individuals still see merit in investing in good architecture. The last two decades have seen a wonderful flowering of technically and visually brilliant new buildings and planning solutions.

Stuttgart. Morning flight from London Heathrow to Stuttgart (Eurowings). An introductory walk through the city centre takes us to 1922 Central Station by Paul Bonatz, the vast and controversial construction site of the new station, Stuttgart 21, and the cuboid public library designed by Eun Young Yi (opened 2011). First of two nights in Stuttgart.

Stuttgart. Le Corbusier, Mies van der Rohe, Walter Gropius, Hans Scharoun and others contributed to the Weißenhofsiedlung, a 1927 housing estate, a landmark in the development of International Modernism for domestic use. Visit two houses by Le Corbusier. The Staatsgalerie is a highly original building by James Stirling; on opening in 1984 it immediately became Germany’s most visited museum. The excellent collections include Oscar Schlemmer’s ballet costumes which helped spread the ethos of the Bauhaus.

Ulm, Munich. Tour the former Hochschule für Gestaltung (Ulm School of Design). Founded in 1953 and designed by Max Bill, a Bauhaus student, the school was one of the most progressive of its time and gained international recognition. Ulm’s Neue Mitte (new city centre) has been reclaimed for new architecture on the site of a post-war urban freeway. The new-build Weishaupt Art Gallery and refurbished Ulm Museum house varied collections from medieval to contemporary. Continue to Munich for the first of four nights there.

Munich. Examine the history and legacy of the Nazi regime: the new Documentation Centre of National Socialist History (2015) on the site of the Brown House stands in direct contrast to Third Reich buildings such as Paul Ludwig Troost’s Führerbau. The afternoon reveals how architecturally and intellectually Munich dealt with the aftermath of wartime destruction through creative reconstruction (Alte Pinakotek, Hans Döllgast), Munich’s first high-rise social housing (Sep Ruf) and façade restoration (19th-century Ludwigstrasse).

Munich. The ‘Four-Cylinder’ BMW Headquarters (Karl Schwanzer, 1972) was joined in 2007 by a museum by Austrian firm Coop Himmelb(l)au. Also 1972, the Olympic complex, designed by Frei Otto and Günther Benisch, sprouted from mounds of WWII rubble with the main structures linked by the iconic ‘tent’ roof. Lunch in the revolving restaurant of the TV tower is followed by a visit to the Herz-Jesu church by Munich architects Allmann Sattler Wappner, opened in 2000.

Munich. Pass through the Marienplatz, dominated by the Neo-Gothic city hall, to Herzog & de Meuron’s 5 Höfe, a quintet of courtyards and passages opening up a historic city block, and Sep Ruf’s Neue Maxburg courthouse and office block, a cautious insertion of 1950s modernism into the historic fabric. Free afternoon – the museums quarter is suggested: Pinakothek der Moderne (Stephan Braunfels 2002), Museum Brandhorst (Sauerbuch Hutton 2009) and the Lenbachhaus (2013 extension by Foster + Partners).

Munich. Visit the Ohel Jakob synagogue (Rena Wandel-Hoefer and Wolfgang Lorch 2004–06), its lower part clad in travertine and topped by a glass cube which represents the tent of Moses (Ohel). On the way to the airport, pass the Allianz Arena football stadium designed by Herzog & De Meuron (2005). Arrive London Heathrow late afternoon.

Air travel (economy class) with Eurowings & British Airways (aircraft: Airbus 319 & 320); travel by private coach; hotel accommodation as described below; breakfasts, 2 lunches and 4 dinners with wine, water and coffee; all admissions; all tips; all taxes; the services of the lecturer and tour manager.

Althoff Hotel am Schlossgarten, Stuttgart: a modern, international 5-star hotel excellently situated next to the Schlossgarten Park. Hotel Torbräu, Munich: a friendly, family-run, 4-star hotel in the city centre. Single rooms throughout are doubles for sole use.

Quite a lot of walking is required and standing around is unavoidable. A good level of fitness is necessary. Average distance by coach per day: 32 miles. 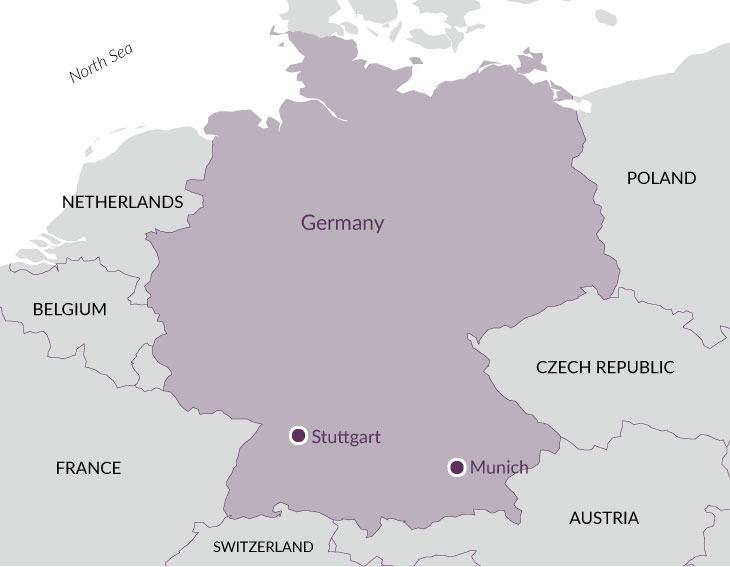