These webinars present the ideas and personalities of eight outstanding – and articulate – musicians through interview and discussion. All are leading practitioners in the field of early music, and all are performers in Music in Suffolk Churches (The MRT Festival of Sacred Music, 4–7 July 2022) and/or in Celebrating William Byrd (A Festival of Music in Lincolnshire Churches, 1–5 July 2023).

Participating artists are (in alphabetical order) John Bryan, Adrian Chandler, Jonathan Cohen, Robert Hollingworth, Owain Park, Rachel Podger, Carolyn Sampson and Jonathan Sells. In conversation with John Bryan, they will talk about their ideas and their roles in relation to composers and audiences and their thinking behind their programmes in the Suffolk festival.

The series was conceived as a service to those who are attending the Suffolk festival, but they are open to anyone else for a subscription of £55 for all four and will be of enormous interest to anyone who is interested in music and performance, especially of earlier repertoire.

The first episode will be streamed live at 4.30pm on 12 May. This will be a solo talk by John Bryan, ‘Composer – Performer– Listener’, in which he explores how performers, particularly of pre-classical music, come to an understanding of what composers may be asking of them and how they communicate this understanding to audiences, and will be followed by a question and answer session.

The other four episodes will have been pre-recorded, and will be sent to subscribers on 13 May for you to watch at any time up to 21 July. Recording and editing of the conversations is still underway so we can’t yet say which artists will appear in which episode.

John Bryan is Emeritus Professor of Music at the University of Huddersfield, an artistic adviser to York Early Music Festival, director of the Rose Consort of Viols and chair of the Viola da Gamba Society. A highly engaging speaker, he has given talks on many Martin Randall Travel festivals.

Virtuoso violinist Adrian Chandler is founder and director of La Serenissima, a world-class ensemble bringing life-affirming Italian Baroque music and Vivaldi in particular to a global audience. They claim to be the only instrumental ensemble on the planet to work exclusively from their own performing editions.

Jonathan Cohen is founder and director of Arcangelo, which exploded onto the Baroque and Classical scene in 2010 with a commitment to the collaborative ideal of chamber music performance. He is also Artistic Director of Tetbury Festival, Artistic Partner of the Saint Paul Chamber Orchestra (Minnesota) and Music Director of Les Violons du Roy (Canada).

Robert Hollingworth is founder and director of I Fagiolini, the solo-voice ensemble internationally renowned for imaginative programming and innovative productions. He is also Artistic Director for the Stour Festival, Reader in Music at the University of York and guest conductor with ensembles around the world. His pre-concert talks are legendary for their wit and insight.

Singer, organist, conductor and composer, Owain Park is director of the Gesualdo Six, a vocal group he formed in Cambridge in 2014 and now much in demand both in the UK and abroad. Among the ensembles he has conducted are the BBC Singers and the Academy of Ancient Music, and his stunningly beautiful compositions are popular worldwide.

Rachel Podger is one of the finest violinists of our time within 17th- and 18th-century repertoire (‘the unsurpassed British glory of the Baroque violin’ – The Times) and her performances and recordings continue to garner awards from around the world. She founded the Brecon Baroque Festival and leads the ensemble Brecon Baroque, and teaches at the Royal Academy of Music, the Royal Welsh College and the Julliard School.

Carolyn Sampson is one of the world’s most sought-after sopranos for opera, oratorio and art song. While best known for earlier repertoire, her performances have traversed the whole range – in opera she has sung the roles of Anne Truelove and Mélisande as well as Semele and Pamina. Her many recordings have been showered with accolades and awards.

Jonathan Sells is an international concert and opera singer and conductor. He is artistic director of Solomon’s Knot, founded in London in 2008 ‘to blow the dust off early music’ and to communicate the full power of 17th- and 18th-century music as directly as possible. The group performs without a conductor, the singers learning their parts by heart. 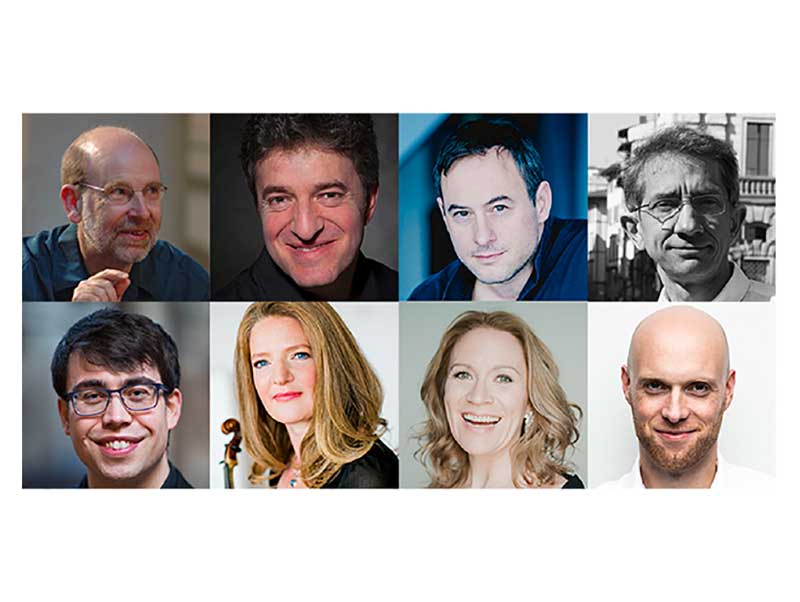