The year 2017 marks the anniversary of a key moment in recorded history. 1900 years ago, upon the death of the emperor Trajan, the Roman Empire attained its maximum territorial extent: spanning eastwards from Lusitania (modern-day Portugal) all the way to short-lived Mesopotamia in modern-day Iraq, and southwards from Britannia to Aegyptus.

This was an empire of nearly 2 million square miles; holding sway over 70 million inhabitants and accounting for approximately 21% of the world’s population at the time. The Romans made ingenious advances in infrastructure and engineering which we continue to take for granted today, and in the process left behind an immense series of monuments which pay tribute to their legacy.

The (alphabetical) list below is by no means comprehensive, and sticks to sites and buildings in regions currently considered safe to visit; hence the notable absence of Palmyra and Baalbek. It is designed to illustrate the awesome breadth of the Roman Empire, and how sometimes it left vestiges in corners that one might not have imagined.

During Roman rule of Britannia, Bath was named Aquae Sulis, after the Celtic god Sulis who the Romans identified with their own god Minerva. The Roman Baths, located below modern street level, are the chief attraction here, including a caldarium (hot bath), tepidarium (lukewarm bath), and frigidarium (cold bath). The city’s Archaeological Museum contains an impressive selection of Roman artefacts, as well as remnants of the temple to Sulis Minerva.

We are in the process of finalising a new itinerary which visits the Roman settlement of Aquae Sulis in Bath: please request advance details for The Romans in Southern Britain. Commissioned by the infamous Herod the Great during his period of rule over Judea, the city of Caesarea was built as a miniature Rome on the coast, intended to impress the emperor Octavian. Highlights include an aqueduct that served the city with fresh water from Mount Carmel, a theatre where contemporary audiences could witness gladiator fights against the backdrop of the Mediterranean, and a number of colonnaded lanes, temples and shrines.

We visit Caesarea on our archaeological tour of Israel & Palestine.

A significant Roman port on the route from Europe to Asia and the setting for battles between Caesar and Pompey during the Roman Civil War, Dürres boasts the largest amphitheatre in the Balkans, as well the remains of its Roman Forum. Its archaeological museum is not to be missed either, which, amongst other discoveries, contains a great collection of Roman funeral steles and sarcophagi.

Dürres features on the itinerary of our history tour: Albania: Crossroads of Antiquity.

The most widely excavated archaeological site in the Middle East, Ephesus is a staggering prospect – an ancient city with ruins spanning nearly 2.5 millennia. A significant portion of these date from its Roman era, including the Library of Celsus (the monumental tomb of the eponymous governor of Asia and once home to over 12,000 scrolls) and its impressive Roman terrace houses. Hadrian’s Wall runs for 73 miles across Northern England, and marked the northernmost frontier of the Roman Empire. Visits to the various sites along the Wall give a fascinating insight into the lives of the 12–15,000 Roman soldiers positioned there, such as the remains of the fort at Housesteads, and Vindolanda, where archaeologists have discovered the most important collection of military and private correspondence in the Empire.

A week is devoted to exploring segments of the Wall on foot during our archaeology and walking tour: Walking Hadrian’s Wall. While Petra alone makes Jordan a popular destination for archaeology enthusiasts, the country is also home to Gerasa, one of the largest and best-preserved Roman sites outside Italy. Located just outside the modern Jordanian city of Jerash, Gerasa was a city of the wealthy Roman provinces of Syria and later Arabia. The site retains its oval piazza, cardo flanked by colonnades, a giant triumphal arch built to honour the arrival of Emperor Hadrian, and various theatres and temples.

We spend a full day exploring the Roman settlement of Gerasa on our archaeological tour: Essential Jordan.

These cities in the Rhône corridor formed part of a crucial trading route between the Mediterranean and Roman Gaul, and since they were designated Roman Coloniae, they were afforded the means by which to build great monuments. The Pont du Gard is a remarkable feat of Roman engineering – a bridge almost 50 metres tall which spans the River Gardon and forms part of the 31-mile Nîmes Aqueduct.

The immense amphitheatres of Nîmes and Arles have survived to the extent that they are regularly used for bullfighting and concerts today, while the Roman Theatre of Orange and the Maison Carrée in Nîmes complete an outstanding collection of Roman buildings in the region.

Visit these Roman sites and more on Romans in the Rhône Valley.

Pula is located on the southern tip of the Istrian Peninsula in Croatia, an area conquered by the Romans in 177 BC. A city rich in Roman monuments, Pula’s limestone Arena is the only Roman amphitheatre to retain its four side towers, while the Temple of Augustus arguably rivals the Maison Carrée in its remarkable state of preservation.

The Roman ruins of Pula are explored on our tour of Croatia, Italy and Slovenia: The Imperial Riviera. The first Roman settlement on the Iberian Peninsula, Tarragona was founded as Tarraco by Scipio Calvus during the Second Punic War. Among the monuments still visible today are its walls (segments of which even predate Roman occupation), amphitheatre and, a little outside the city, the Los Ferreres Aqueduct; probably built during the rule of Augustus, the first ruler of the Roman Empire.

You can visit Tarragona and other Roman sites in the region on The Romans in Mediterranean Spain. Situated near the modern Moroccan city of Meknes and one of the Empire’s most remote settlements, Volubilis served as the administrative centre of Roman Mauretania between 44 and its abandonment in 280 AD. The site’s distinctive triumphal arch, basilica, Roman baths and mosaics displayed in-situ make it an outpost of the Roman Empire that is well worth a visit.

We spend time at the Roman site of Volubilis on our tour of Morocco: please request advance details for Morocco – Cities and Empires. 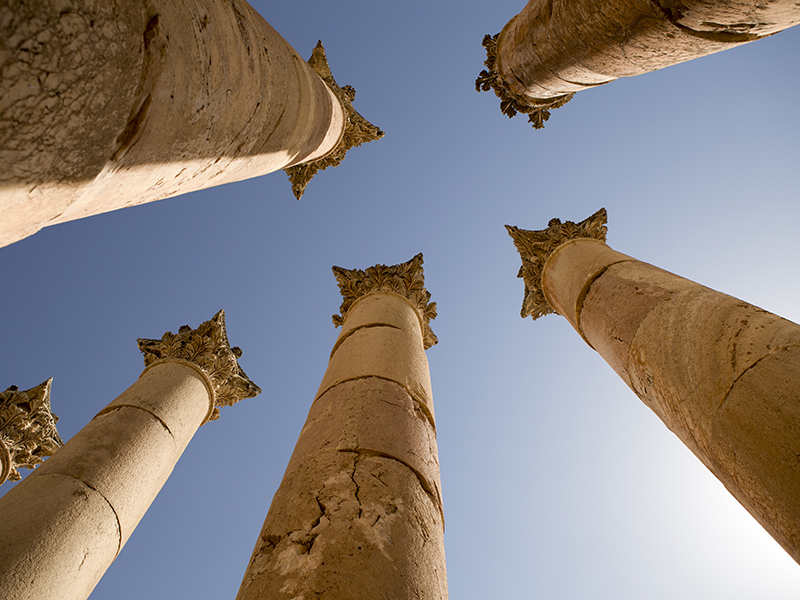