At one with the Gods

The Classical Turkey itinerary visits the finest group of Hellenistic and Roman city ruins to be found anywhere. The natural settings in which they are found are a prism through which to understand them, says Will Harvey.

I’m sometimes asked how I can derive so much satisfaction from visiting ancient ruins. To be fair, it can be difficult to envisage the full glory of an ancient site, particularly if the passage of time has worn it down to an unrecognisable extent. What I have increasingly discovered is that, in many cases, one can appreciate a site in the same way the ancients did by observing the marriage of nature and architecture.

The theatre at Pergamon sits at the top of the sky. It provides what is surely one of the most spectacular – and dizzying – settings of the ancient world. Perched at the crest of a windswept mountain, the theatre is one of the steepest of its kind and cascades down the slope of the acropolis. The light is clear, the air is crisp (particularly in early spring when the tour takes place) and the feeling one encounters from perching atop is almost spiritual. Greek architects liked to situate their theatres in places that gave the audience a spectacular view, not just of the actors on the stage but also of the landscape behind. The theatre at Pergamon is a brilliant –and easily understood – example of this philosophy. About 11 miles south of the city of Miletus is the Hellenistic Temple of Apollo at Didyma. Even in its ruinous state, it is simply enormous and reflects the fact that the temple’s oracle was second only in importance to that at Delphi. It was built around the site of a natural spring, believed to be the source of the oracle’s immense power. After climbing the marble steps to the temple platform, one walks back down through one of two sloped tunnels to the adyton (inner chamber), to which access was restricted. This enclosure was (and continues to be) surrounded by incredibly high walls that reach for the heavens. Temple of Apollo at Didyma.

What is most striking about this Greek temple is the contrast between its imposing architecture and the natural beauty it sought to cultivate within its walls. Very unusually, the adyton was situated at ground level and exposed to the azure blue of the Aegean sky, meaning a grove of laurel trees could be planted. In the midst of this grove was the oracular spring. The ancient architects clearly wanted to impress upon the visitor a dramatic sense of mortal insignificance – but also to remind them that the oracular power they sought had its origins in nature and its abundance.

Will Harvey accompanied Classical Turkey – Greeks and Romans in Anatolia in 2019. He studied Law and Classics at the University of Otago in Dunedin (his hometown), before going on to complete a Master of Arts in the area of Ancient Greek Religion. He supervises the Middle East, as well as Scotland, Ireland and Wales.

View itinerary for Classical Turkey – Greeks and Romans in Anatolia 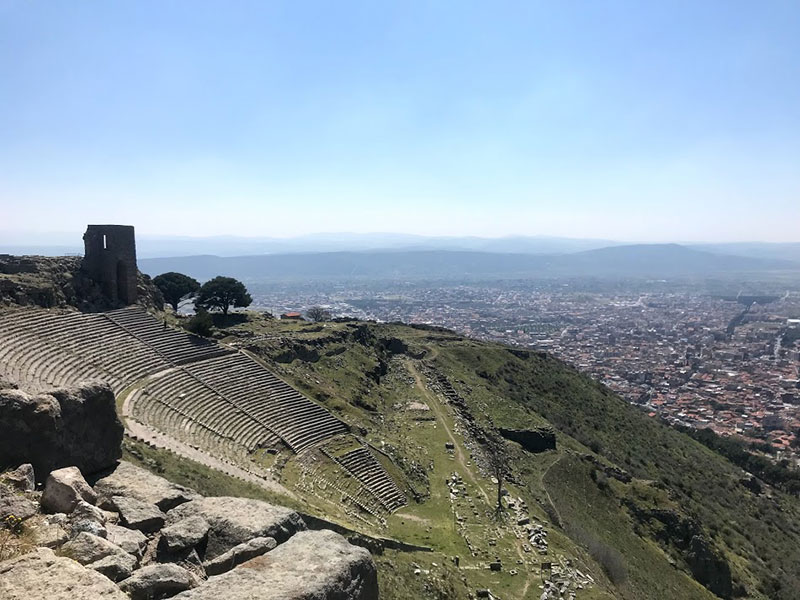