When I saw 'Ireland and the Troubles' on MRT publicity for 2018 I couldn’t suppress the overwhelming desire to be on board. Having been born and raised in Northern Ireland, the tour resonated loudly with a desire to return and to raise my awareness of the ‘terrible beauty’ of Ireland in the 20th century.

I grew up in the town of Portadown, south-west of Belfast, in the middle of Northern Ireland and in the centre of the Protestant heartland. As I child I never met any Catholic kids; they lived in different areas, went to different schools and even played different sports. I actually went to school with two children who were to grow up to become notorious terrorists. Billy Wright, or King Rat as he became known, was the founder of the extremist Loyalist Volunteer Force and his lieutenant, Mark Fulton, were both school pals. Both were to die in prison, Wright shot by the Irish National Liberation Army as he waited for a prison visit.

As a child it didn’t seem abnormal to have the army on the streets and helicopters in the air all the time. Indeed, I recall the excitement of persuading the soldiers to give us a ride in their ferret scout cars (we thought they were tanks!) and I had a fine collection of regimental cap badges. There probably wasn’t a family in Northern Ireland who were not touched in some way by the Troubles. My dear friend Gail’s father was the first person to be killed in the conflict; William Creighton was shot by the IRA in a bungled robbery at his garage on the outskirts of Belfast in 1968. My own family emerged relatively unscathed, nothing worse than my Auntie Pearl losing her false teeth in the La Mon Hotel bombing in 1978.

It was music that was to be my way out. In the County Armagh youth orchestra, I met a Catholic lad from the republican south of the county and our shared passion for music sustained us on our journey through the Irish National Youth Orchestra and the British Youth Wind Orchestra. We are still best friends and nowadays he is head of the A-level music examinations for Northern Ireland.

‘A terrible beauty - Ireland and the Troubles’ is led by Patrick Mercer, a former army officer, who completed eleven tours of duty at the height of the Troubles and who is also a noted military historian with an encyclopaedic knowledge of military events in Ireland from 1798 to the present day.

The first two days in Dublin set the scene for the partition of Ireland and, in particular, the events of the 1916 Easter Rising. We visited the General Post Office (GPO) where the rebels were holed up for five days and which was nearly completely destroyed by shelling after the government brought a gunboat up the river Liffey.

We visited Northumberland Road, where just seven rebels, holed up in Clanwilliam House inflicted huge casualties on men of Patrick’s own regiment, the Sherwood Foresters, at the battle of Mount Street bridge in April 1916. Here General Lowe insisted that his men advance over the bridge on the whistle as they had been trained to do. However, this was not trench warfare but an urban battle against well-entrenched rebels and over 220 men lost their lives taking a position that could easily have been by-passed and surrounded.

In our lectures, we learnt how the First World War had intervened to prevent what might have been a civil war as Ireland sought home rule from Westminster. The Curragh mutiny of March 1914, where British army officers offered to resign their commissions rather than make a move against the Unionist forces in the north, set the tone for the ultimate partition of Ireland in 1921. However, even the fiercely nationalist leader, John Redmond declared that the First World War:

‘[was] undertaken in defence of the highest principles of religion and morality and right and it would be a disgrace for ever to our country, and a regret to her manhood, and a denial of the lessons of history, if young Ireland confined her efforts to remaining at home to defend the shores of Ireland from military invasion, and to shrinking from the duty of proving on the field of battle of that gallantry and courage which has distinguished our race through its history.’

Our first taste of Northern Ireland was morning coffee in Crossmaglen and then a walking tour of this border village. Crossmaglen was at the epicentre of ‘bandit country’ during the Troubles and the heart of nationalist South Armagh. We explored IRA tactics in their conflict with the army and visited sites where there had been significant ‘contacts’ between the two adversaries.

Over the next couple of days the tour continued with one highlight a visit to the Bogside in ‘Stroke City,’ or Derry/Londonderry, as it is known today. After an outlining of the events of Bloody Sunday in 1972, we visited the Museum of Free Derry, where a young man, whose grandfather had been shot dead on that day, gave an impassioned talk.

Other highlights were a visit to the Falls Road and Ballymurphy housing estate in West Belfast, where we were joined by one of Ireland’s top journalists on political affairs. His name is withheld for security reasons but his insights were illuminating and the tour participants were mesmerised by his stories.

I could never have visited these nationalist areas when I was younger and it was fascinating to be there, on the ground, and to put into context events of which I’d always been conscious.

A less alien experience for myself was the visit to my home town, Portadown, where we watched the huge 12th of July Orange parade returning from its day out in Loughgall, the small village where the Orange Order was founded. Everyone on the tour found this enthralling; a profusion of colour and pageantry, with the sounds of the lambeg drums mingling with a myriad of brass bands, pipe bands, flute bands and accordion bands.

I have managed a wide variety of tours for MRT but along with all of the clients, many of whom were experienced MRT travellers, we all agreed that this was the best we had ever done.

Do not miss out on this wonderful, amazing, challenging, thought-provoking tour.

View itinerary for 'A terrible beauty'

View all tours to Ireland 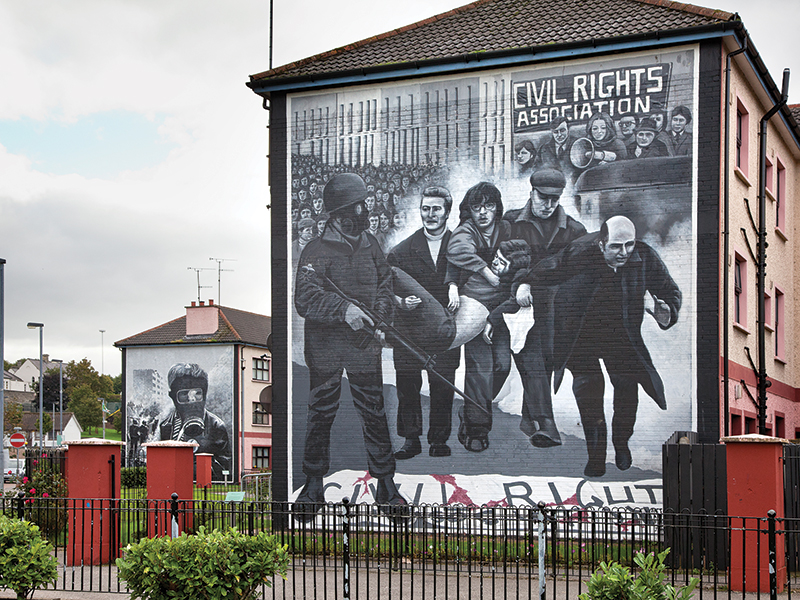