Gardens in the Highlands - Horticulture and garden design in northern Scotland

Wonderful and various gardens with a backdrop of some of the loveliest and most dramatic scenery in Britain.

Famous gardens and little-known treasures in the northern counties of Scotland, from Aberdeenshire to Caithness and Wester Ross.

Walled gardens a speciality – providing protection against the Scottish wind for a vast range of both edible and ornamental plants.

Stay in five-star hotels on the outskirts of Aberdeen and Inverness.

Note that appointments for some visits cannot be confirmed until January 2023.

Aberdeen. Arrive in Aberdeen independently (see ‘Practicalities’ for further details). The tour begins with dinner at the Marcliffe Hotel on the outskirts of Aberdeen. First of four nights here.

Fyvie, Pitmedden. The 18th-century walled garden at Fyvie Castle has been gloriously renewed, the design echoing a ceiling in the house, and there is another garden with American trees and shrubs. The house is an Edwardian dream of a Scottish castle, with a good picture collection. The formal Baroque garden at Pitmedden is one of the finest examples of this style in the world, the intricate hedging filled with colourful bedding. Also an orchard with over 200 fruit trees.

Arbuthnott, Crathes. Originally laid out in the 17th century, the terraced and walled gardens of Arbuthnott House have evolved through the years and now show a strong Arts & Crafts influence. 16th-century Crathes Castle also has a walled garden in Arts & Crafts style, lovingly referred to as ‘The Sissinghurst of Scotland’. A guided tour of the castle before returning to Aberdeen.

Balmoral, Aberdeen. Set in stunning Deeside landscape, the gardens at Balmoral Castle were originally developed under the supervision of Prince Albert and have since been expanded and improved by successive members of the Royal Family, recently the Queen Mother and the Duke of Edinburgh. On return to Aberdeen, an optional visit to the Winter Gardens at Duthie Park, one of the finest displays of ornamental plants under glass in the country, and the third largest in Europe. Alternatively some free time, perhaps to enjoy Aberdeen’s excellent art gallery.

Haddo, Gordon. Traverse the Grampians. Haddo House is a stately home built by William Adam in the 1730s; the terraced garden is Victorian – formal herbaceous borders, walks, lakes, monuments. Gordon Castle, the spiritual home of Clan Gordon, has one of the oldest and largest walled gardens in Britain, restored to its former glory with a modern design by Arne Maynard; perfume garden, nectar garden, lavender garden, maze. First of four nights in Inverness.

Cawdor, Old Allangrange. The walled garden at Cawdor Castle has been planted with a holly labyrinth with a Minotaur in the centre, and also the Flower Garden and Wild Garden. Guided tour of the house. The garden at Old Allangrange surrounds the 17th-century lime-washed house with a formal landscape naturalistically planted and organically gardened, with formal hedges to create a strong structure and frame wonderful views. Viewing mound, vegetable garden, orchard, ice-house.

Dunbeath, Dunrobin. Dunbeath Castle, enjoying spectacular views over the Moray Firth, has two distinct walled gardens, the southern designed by Xa Tollemache in 1999 and the northern redeveloped in 1997 with ornamental grasses, primula, iris and roses. Dunrobin Castle, home of the Earl of Sutherland, is the most northerly of Britain’s great houses, externally largely the work of Sir Charles Barry. He also designed the formal gardens in his favoured Italianate style in 1850.

Inverewe, Dundonnell. Inverewe is one of the most famous gardens in the British Isles and our finest subtropical garden. With wonderful views across Loch Ewe, and benefitting from the Gulf Stream, Inverewe is a haven for plants from around the world. Sitting amid the loveliest of Highland scenery, the wonderful gardens of Dundonnell House consist of a series of rooms, one of the most outstanding gardens of its type in Scotland. Also kitchen garden, fine borders and a William Pye water feature. 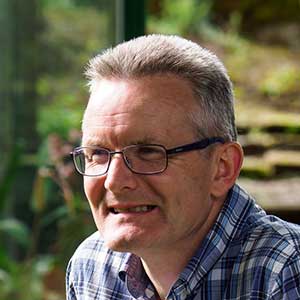 A widely-travelled plantsman with a keen interest in garden design, Colin studied horticulture at the West of Scotland Agricultural College and worked in the Savill and Valley gardens in Windsor Great Park. He was then appointed head gardener to the Queen Mother at Royal Lodge before moving to the Royal Horticultural Society at Wisley where he became curator of the gardens. Colin returned to Dumfries and Galloway in 2015 to run his own horticultural consultancy. He also leads garden tours in the UK and internationally and has appeared on radio and television.

Transport to Aberdeen and from Inverness is not included in the price of the tour. Both are easily reached by flights and trains from all parts of Britain, including the Caledonian Sleeper. There is plenty to do in Inverness on Day 9 before it departs.

travel by private coach; hotel accommodation as described below; breakfasts, 1 lunch, 4 teas and 6 dinners with wine, water, coffee; all admissions and donations for gardens and houses; all tips; all taxes; the services of the lecturer and tour manager.

Both hotels are boutique 5-star (Scottish Tourist Board) properties in quiet suburbs, and both have excellent service, comfortable rooms and their own restaurants. The Marcliffe Hotel & Spa, Aberdeen: three miles from the railway station, well planted private grounds, lovely traditional styling. Ness Walk, Inverness: 15 minutes on foot from the centre, opened in 2019 in a Victorian villa beside the River Ness, bedrooms in newly built wings, pleasingly restrained décor..

There is quite a lot of walking on this tour, and a good level of fitness is essential. Some of the gardens are large and on sloping ground, and there is often an additional walk from coach park to garden. Unless you enjoy unimpaired mobility, cope with everyday walking and stair-climbing without difficulty, this tour is not for you. Some days involve a lot of driving – average distance by coach per day: 80 miles.

'Colin lectured fluently and knowledgeably. He spoke passionately and for appropriate lengths of time during the visits. He adapted his topics to the interests of the audience as the visits evolved. A wonderful lecturer who we will look out for in the future.'

'When visiting various gardens, the gardeners who took us round were incredibly well informed and knowledgeable about their pride and joy gardens, Absolutely superb.'

'Colin was brilliant – incredibly knowledgeable and highly respected by all the gardeners we met. Also very charming, easygoing and with a nice sense of humour.'