Mantegna & Bellini at the National Gallery

There is a side chamber of the Sainsbury Wing, amid the National Gallery’s beguiling selection of Renaissance art, which allows an opportunity for intimacy and contemplation found in few other rooms.

This is not the Leonardo room, as sadly an appreciation of his haunting The Virgin of the Rocks is punctured inevitably by the many others jostling in this space. Instead I refer to its counterpart, which contains a selection of 15th-century religious paintings, the bulk of which by Andrea Mantegna and Giovanni Bellini.

Central to the room are two depictions of the biblical scene The Agony in the Garden. Mantegna’s interpretation (c.1459), the earlier of the two, embodies a claustrophobia that is characteristic of many of the painter’s works, with the desperate Christ visibly encircled between his sleeping disciples, angelic hosts, Judas leading the Roman soldiers and even the densely concentrated landscape. This tension is compounded by the presence of a dead tree and vulture beside Jesus, whose own fate is now inescapable. Andrea Mantegna, The Agony in the Garden, about 1458–60, © The National Gallery, London

Bellini’s version (c.1465) is an altogether brighter composition, which unfolds gradually to the eye. The spacing of the figures places more distance between Christ and his pursuers, creating a calmer atmosphere for the narrative, while even the rock on which he is praying seems to morph into a natural pew, in stark contrast with the jagged formations of Mantegna’s piece. Moreover, the glow of Bellini’s wonderful rosy dawn sky seems to offer the prospect of hope and salvation; a light which – upon closer inspection – seems to also emanate from Jesus himself. Giovanni Bellini, The Agony in the Garden, about 1465 © The National Gallery, London.

That these paintings are displayed in the National side by side is in fact no coincidence; the artists were brothers-in-law (it is believed that both paintings were inspired by a drawing by Bellini’s father, Jacopo), and their creative and personal relationship is the subject of an upcoming exhibition at the National Gallery, for which Martin Randall Travel has organised a special study day on 10 December – see here for more information.

The story of these leading lights of Quattrocento Italy is one of contrast, and not just from an artistic viewpoint. Whereas Bellini grew up, worked and died in Venice and spent little time anywhere else, Mantegna was a more restless soul, moving from his native Padua to Mantua to work as court painter for the ruling Gonzaga family, before living and working on projects in Rome and Verona. In the latter case this could be chalked down to the circumstances of Mantegna’s training. Bellini’s gentle easing into the family tradition of painting; which he undertook alongside his brother Gentile, juxtaposes sharply with his brother-in-law, who broke away acrimoniously from his Paduan master Squarcione at the age of seventeen, later claiming that the older artist profited from his work without paying the rights. What is in little doubt is the astonishing influence of these painters; both on each other, and on subsequent generations. The scholarly interest in antiquity and humanism that suffuses Mantegna’s art had a profound impact on Bellini’s early style, and Bellini’s atmospheric landscapes and chromaticism in turn inspired Mantegna. As a teacher, Bellini enthused his pupils with aesthetics and oil painting drawn from the Northern Renaissance, and his school was to spawn some of the greatest artists of the 16th century, including Titian and Giorgione. Mantegna was highly influential both as a painter and an engraver, with Albrecht Dürer and Leonardo da Vinci among those who were taken with his work during visits to his studio.

‘Mantegna & Bellini’ will trace the fascinating careers of two of the greatest painters of the Italian Renaissance. It runs 1 October 2018–27 January 2019 at the National Gallery, London.

MRT’s Mantegna and Bellini study day on 10 December 2018 features morning lectures at the Society of Antiquaries, before lunch at a good restaurant between the lecture venue and the Gallery.

The lecturers are: Caroline Campbell, Jacob Rothschild head of the curatorial department at the National Gallery; Sarah Vowles, curator of Italian prints and drawings at the British Museum. Jill Dunkerton, National Gallery conservator who has spent much of the last three years restoring Bellini’s Assassination of St Peter the Martyr, which will be a highlight of the exhibition.

View full details of our Mantegna and Bellini study day 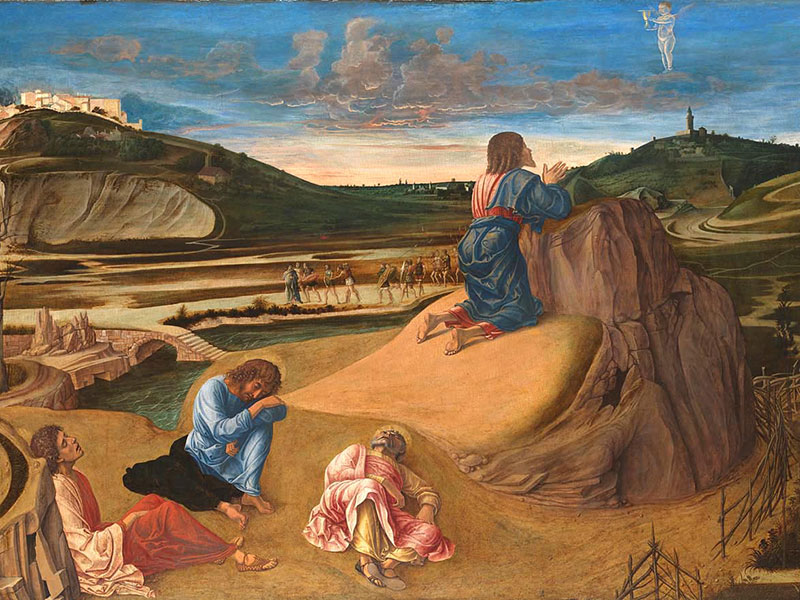