The Age of Power: Science and Globalization in the 18th century – five online talks by Patricia Fara

Knowledge is Power: The dictum of Elizabethan philosopher Francis Bacon inspired many generations of British researchers, fuelling not only their experimental approach towards the world but also their expansionist ambitions. Far from being an abstract intellectual exercise, science was rooted in political and commercial interests, relying mainly on private initiative and investment with relatively little support from government financing. By the end of the 18th century, Newtonian science had eclipsed its competitors, British industry was booming and the nation’s territorial possessions were spreading around the world. Although the term ‘scientist’ had not yet been coined, this was a crucial foundational period for modern scientific society.

These five talks explore ways in which power was harnessed in bids for technological progress, economic gain and global influence. Drawing liberally on art, literature and politics, they demonstrate that scientific achievements are inseparable from their cultural context.

They take place every Thursday from 23 March to 20 April at 4.30pm (GMT +1) and, including Q&A, will probably last just under an hour. They are available for viewing for eight weeks after the last episode is streamed (15 June 2022).

Newton’s ideas underpinned a worldview characterised by central control, uniformity and mathematization – Newtonian imperialism. Metaphorically, Britain lay at the hub of a global system, dominating the world by importing unprocessed materials and exporting the products of civilization, including scientific knowledge. Furthermore, as head of the Royal Mint for 30 years, Newton profited from the triangular trade in gold, sugar and enslaved peoples. After he described the cosmos in equations, the Enlightenment faith spread that numbers are what count: quantification now also embraced the natural and the human worlds.

Electrical machines were the most exciting invention of the 18th century – ‘An Entertainment for Angels,’ enthused one fictional young woman. Initially, these powerful new instruments produced, stored and discharged static electricity, but in 1800 the first battery appeared that could generate a continuous current. Electrical experts earned money through their dazzling performances, but they also promised humanitarian benefits, such as medical cures and agricultural improvements. Particularly through association with Benjamin Franklin, electricity came to symbolise a revolutionary and more democratic future.

Steam engines were first used in Cornish mines, but during the 18th century they were recruited to power Midlands machines. The Lunar Society – an informal group of 12 inventors, factory owners, doctors and social reformers – met to exchange ideas every month. They are credited with making England the first European country to embark on industrialization by introducing mechanization, embracing science and developing efficient transport networks. Several members were also politically active, campaigning to abolish international slavery, expand women’s education and improve working conditions.

The 18th century is often called the Age of Discovery, but many apparently scientific voyages of exploration were also motivated by ambitions to acquire natural resources, secure foreign territory and establish trade deals and markets for British goods. Global ecology altered irreversibly as crops, animals and plants were transported around the world. As a case study, this lecture focuses on Joseph Banks, the botanist who sailed to Australia with James Cook and ruled the Royal Society for 42 years: he exemplifies British ambitions and the power of royal patronage.

Often said to be the first work of science fiction, Frankenstein provides an extended and subtle commentary on science’s influence over society and the ethical problems that arise. The book originated as a ghost story, but developed to include the latest scientific topics including polar exploration, electricity and chemistry. Extremely well-informed, Mary Shelley also drew on other fields to consider central questions that remain unresolved – the nature of life, the distinctions between people and animals, and the moral price of progress.

Emeritus Fellow of Clare College, Cambridge and historian of science. She was President of the British Society for the History of Science from 2016 to 2018. She is currently President of the Antiquarian Horological Society, a Fellow of the Royal Historical Society and the recipient of the 2022 Abraham Pais award of the American Physical Society. Her prize-winning Science: A Four Thousand Year History (2009) has been translated into nine languages. Her other highly acclaimed books include Life after Gravity: Isaac Newton’s London Career (2021) and A Lab of One’s Own: Science and Suffrage in The First World War (2018).

Image: 'Joseph Wright of Derby – A Philosopher Giving Lecture on the Orrery' by irinaraquel is licensed under CC PDM 1.0. 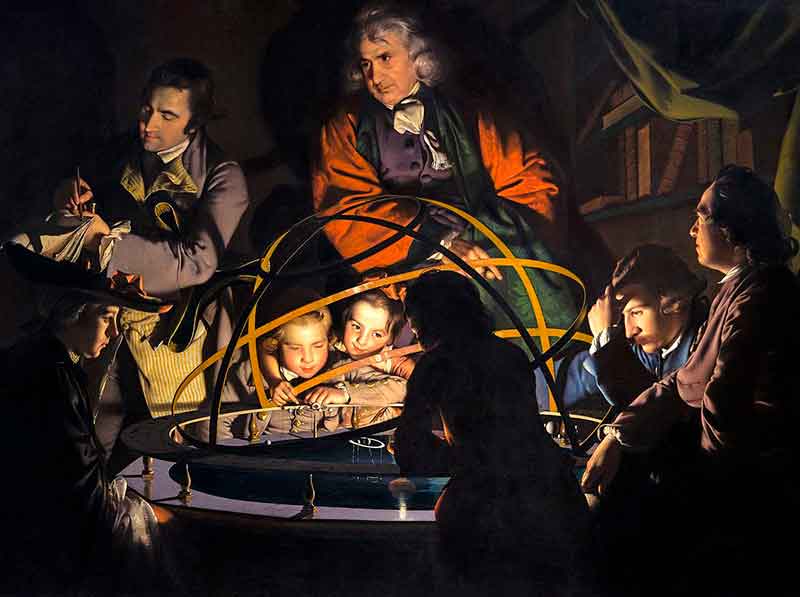