Arabia has an enduring and unique quality of inspiring mystique. For the outsiders who have written about Arabia from Antiquity to Modernity, it has seemed remote, its deserts impenetrable and its inhabitants little understood. Much of what has been told about Arabia consequently stems from stories stoked by the imagination, and these obscure our grasp of the region’s actual inhabitants and their impressive and influential achievements across time, at the forefront of which is the rise of Islam.

This series of six talks examines both sides of the coin, exploring the genesis of the myths about Arabia and the reality behind them. We will trace the threads of the most significant stories told of Arabia and the Arabs, and unravel these to understand key events from earliest recorded history to Arabia’s pivotal role in shaping Islam.

They take place every Monday and Wednesday from 3rd to 19th October at 4.30pm (GMT +1) and, including Q&A, will probably last an hour. They are available for viewing for eight weeks after the last episode is streamed (14th December 2022).

The stereotype of the Arabs as Bedouin is universally recognised today, but the image has a large component of mythology bound up with it. There was a time when Europeans did not associate Arabs automatically with Bedouin, and the transformation of perceived Arab identity into a desert nomad guise was founded on a particular mystique of Arabia that stirred Enlightenment and colonial imaginations. The story is one of the more intriguing myths about Arabia and reveals much about the history of Europe too.

The Arabian mystique has an ancient pedigree, and this lecture traces the first glimpses of Arabia in the historical record. The trail begins in Babylonia and then travels through the imagination of the Greeks. In the meantime, Arabians were building many different kinds of civilisations, developing connections with India, Africa and the Mediterranean. The types of contact and the fabulous merchandise that changed hands ever increased the allure of “Arabia Odorifera” (Arabia the Fragrant).

Arabia in the early centuries CE was dominated by empires, both external and internal. Some of the grandest archaeological monuments from Syria to Yemen attest to this remarkable era, but as these civilisations eroded, their memory faded and the ruins of Palmyra, Petra and others became the stuff of myth even within Arabia itself. This lecture will contemplate the ruins, showing what can be learned from them as archaeological sites, and as sites of memory for Arabians centuries later.

While the traditional story of Muslim Arabic sources tells that the Arabians before Islam were idol worshiping polytheists, the reality of pre-Islamic Arabia’s religious map was much less straightforward. A mixture of Jews, Christians and other obscure forms of monotheism were incubating, competing for souls and variously paving a way for Muhammad’s mission. The lecture explores how these religions interacted and how faith featured in the lives of the original audiences of the Qur’an.

Muhammad’s prophecy, the triumph of Mecca and the spread of the Caliphate from western Arabia across the entire Middle East within some 30 years was an unprecedented reversal of Arabia’s role in history. Arabia was customarily the distant object of outsiders’ dreams, but the rise of Islam turned the tables, and for the first time Arabia’s exports were dominant in a cultural sphere: religion, language and traditions from Arabia now took centre stage as Islam established itself on a global scale. This lecture explores what is ‘Arabian’ about Islam, and what it meant for Arabia to be the centre of wide pan-regional attention.

Ironically, Arabia’s time in the limelight of Islam was brief. Soon after the Caliphate was established, its leaders decamped for new capitals in Syria and Iraq, and while pilgrimage to Mecca kept a tenuous chord of attachment between Arabia and the Middle East, the dwindling of attention caused stagnation and eventually violence that made Arabia virtually as inaccessible for medieval Muslims as it would later be for Europeans. At this point, Arabic-speaking writers in Iraq and Egypt became the latest tranch of outsiders to let loose their imaginations onto the idea of Arabia. They too were captivated by its mystique, and spun tales about the Bedouin just as fabulous as those of the Europeans we met in Lecture 1.

Lecturer in Arabic at Leiden University and a specialist in the cultural history of the Muslim world. Peter has travelled extensively across the Middle East and Central Asia and has studied at the Universities of Damascus and Isfahan. He held a fellowship at the Museum of Islamic Art, Berlin, where he researched Muslim architecture and Arabic calligraphy, studying monuments of medieval Egypt and Uzbekistan. In Oman, he studied pre-Islamic sites and local shrines dedicated to ancient Arabian prophets in as part of his current research focus on the legends and history of Arabia. His publications include Imagining the Arabs (Edinburgh University Press, 2016), a comprehensive exploration of the Arab people in early Islam, and The Arab Thieves (Brill, 2019), a critical study of Arabian outlaw tales. 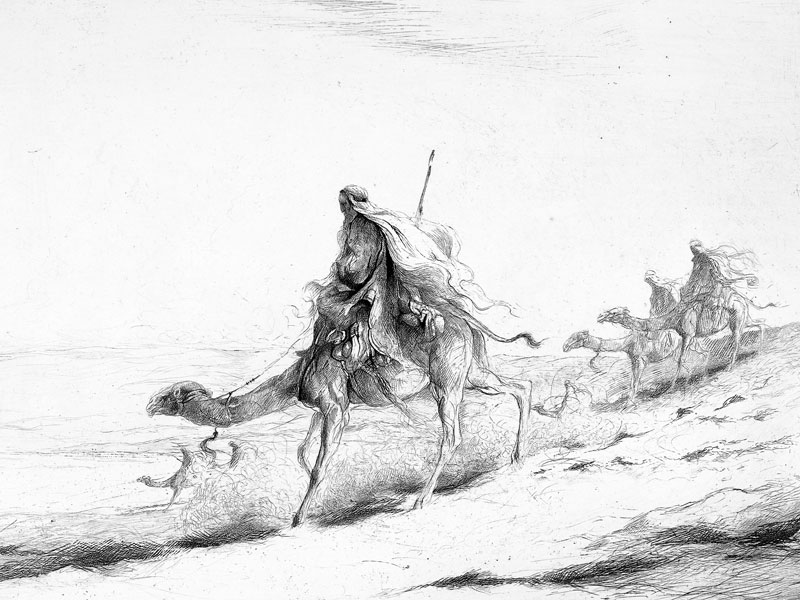