Continuing with our mission to enlighten and inspire, this series of talks engages with a diverse range of subjects within the field of art and design. Art historians, museum chiefs and distinguished researchers – most from the ranks of speakers on our tours and symposia – focus on major artworks, key moments in art history or fascinatingly broad themes.

They take place every Thursday from 29 April to 17 June at 4.30pm GMT+1 (11.30am EDT) and, including Q&A, will probably last just under an hour. They are available for viewing for eight weeks after the last episode is streamed (12 August).

Register for the webinar series for £85

Painting was sometimes referred to as ‘silent poetry’ – how did artists overcome the apparent limitation of not being able to use words to characterise a personality or tell a story? How do they excite pity or laughter or evoke other emotions? This talk will take a fresh look at this surprisingly neglected aspect of the Old Masters.

Desmond Shawe-Taylor is a distinguished art historian and museum administrator whose posts have included Surveyor of The Queen’s Pictures and Director of Dulwich Picture Gallery.

2. Washington Crossing the Delaware: Whose painting? Whose history? by Mary Lynn Riley (6th May)

In 1851, Emanuel Leutze painted what has become the quintessential American history painting, recreating on canvas a dramatic event from the American Revolutionary War which had taken place 75 years earlier. But the painting’s own story is a saga in itself: both revered and reviled for 150 years, this work continues to cause artistic and historical polemic.

Trained as an artist as well as an art historian, Mary Lynn Riley worked for the Smithsonian Museums in Washington D.C. before moving to France where she teaches and lectures and leads MRT tours.

3. The Wallace Collection: past, present and a fragile future by Dr Xavier Bray (13th May)

London’s Wallace Collection is one of the most celebrated museums in the world, and the greatest gift of artworks ever to be transferred into public ownership in Britain. The masterpieces of painting, sculpture, furniture, arms and armour and porcelain were accumulated by successive Marquesses of Hertford and descendent Sir Richard Wallace, who gave them to the nation in 1897.

The Director, Dr Xavier Bray, who has worked previously at the National Gallery and Dulwich Picture Gallery, will share the delights and challenges of managing the Collection and talks about his hopes for it once the pandemic has receded.

4. John Singer Sargent: ‘the portrait of the year’ by Patrick Bade (20th May)

In Paris and London during the Belle Epoque (1870-1914) the painting deemed ‘the Portrait of the Year’ brought fame and social success to both sitter and artist. In London, Sargent painted the prize-winning picture every year between 1892 and 1907. This lecture traces Sargent's determined efforts to achieve this accolade and the consequences it had for both painter and sitters.

Patrick Bade is an art historian who worked for Christies Education for over 30 years. He has published extensively on late 19th-century and early 20th-century art.

Despite widespread wartime destruction of its industrial and domestic infrastructure, postwar Italy quickly established itself as a world leader in stylish design. 'La Linea Italiana' is often used to describe the ‘family of forms’ that included the Vespa, Carlo Mollino’s furniture, the Cisitalia 202 Coupé and Gio Ponti’s DP47 Coffee machine. This talk offers fresh perspectives on the significance of these groundbreaking paradigms of excellence.

Philippa Joseph’s research and teaching cover cross-cultural artistic and architectural exchange and output around the Mediterranean, from the Phoenicians to the early modern period, but she also has a passion for modern Italian design – manifested in collecting as well as research.

6. Michelangelo v Leonardo: Florence circa 1504 by Per Rumberg (3rd June)

In January 1504, Florence’s most prominent artists came together to advise on an appropriate location for Michelangelo’s newly finished David, among them Leonardo da Vinci. Over the following months, Michelangelo and Leonardo went head to head: both were commissioned by the government of Republican Florence to paint monumental murals in the Palazzo Vecchio. This talk looks at this epoch-making encounter.

Curator at the Royal Academy of Arts in London, Per Rumberg was previously Associate Curator at the Morgan Library & Museum in New York and Assistant Curator of Renaissance Paintings at the National Gallery, London.

7. The Colour of Cities: a hidden history of taste by Patrick Baty (10th June)

Many believe that ironwork was painted black to mark the death of Prince Albert, others that Georgian railings were blue. Few subjects in art history are as steeped in myth as paintwork on buildings, which is of course frequently changed. Patrick’s pioneering work over forty years on some of the best-known structures in Britain uncovers a fascinating history of changing tastes.

Patrick’s work on the use of colour on and in historic structures dating back to the 1650s is based on his forensic analysis and research in many hundreds of projects across Britain and the USA.

In spring 1937 the Basque city of Gernika was destroyed by Luftwaffe bombing, with huge loss of life. Fired with a passionate hatred of the Franco regime, Picasso completed his extraordinary riposte two months later – a gigantic carnivalesque dance of death, arguably the greatest painting of the 20th century. It’s subsequent life reads like a political thriller, full of intrigue and dramatic twists.

Acclaimed Hispanist, scholar, writer, lecturer and tour leader, Gijs van Hensbergen has written the definitive study, Guernica: The Biography of a Twentieth-Century Icon (Bloomsbury), which is enriched with revelations that are just as shocking as Picasso’s original nightmare scene.


Register for the webinar series for £85

Image: 'Washington Crossing the Delaware' by Emanuel Leutze is licensed under CC0 1.0. 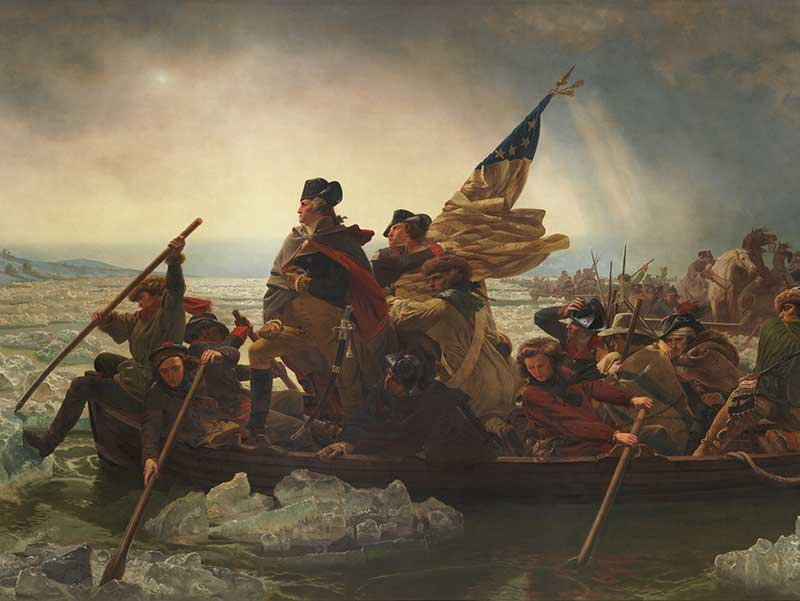