To assert that London is architecturally the most fascinating city in the world would be controversial. The magnificence of its public buildings falls short of those of many capitals, its relatively narrow and largely unplanned streets are far surpassed in grandeur even by many provincial Continental cities and little of its architecture can be claimed to be seminal or internationally influential.

There are, however, a range of types and styles which for variety and beauty are probably unsurpassed anywhere. Outstanding buildings and ensembles are widely spread throughout what was, not much over a century ago, the world’s largest city. For domestic architecture London has no equal, partly because so many inhabitants insisted on having their own front door to the street. And no major city exceeds London for the proportion of green space – parks and gardens, public and private.

These talks take place on 5 July, 2 August and 6 September 2021 – the first Monday of each of month. The start time is 4.30pm GMT+1 (11.30am EDT) and, including Q&A, the session will last around an hour. They are available for viewing for eight weeks after the last episode is streamed (1 November).

Register for the webinar series for £39

By the beginning of the twentieth century, red brick had become the most common of the facing materials which adorned London’s buildings – and so it remains. Yet until around 1880 red was rare, self-effacing greys and buffs having prevailed from the early Georgian period. This talk tells the fascinating story of the small number of defiant innovators – artists and, oddly, soldiers as well as avant-garde architects – who braved critical condemnation before, quite suddenly, red became mainstream.

The National Gallery has been one London’s most familiar buildings since the 1830s – though not among the best loved; critics have been consistently uncomplimentary. This talk looks at the origins of the institution, the choice of site, the controversy around the architectural competition, the constraints imposed on the winner, William Wilkins, and the history of the Greek Revival. The subsequent enormous increase in the capacity of the Gallery scarcely affected the façade – here claimed to be a masterpiece of pragmatic Neo-Classicism.

The basic form of London’s squares is neither unique nor original to the city, but their profusion here is unparalleled. With crescents, associated streets and communal gardens, squares constitute London’s most distinctive and pleasing architectural phenomenon. Squares are predicated upon the terrace, a row of similar houses, which in its most sophisticated form is designed to suggest a single grand building. This talk explores the development and diversity of London’s planned urban environment.

Register for the webinar series for £39 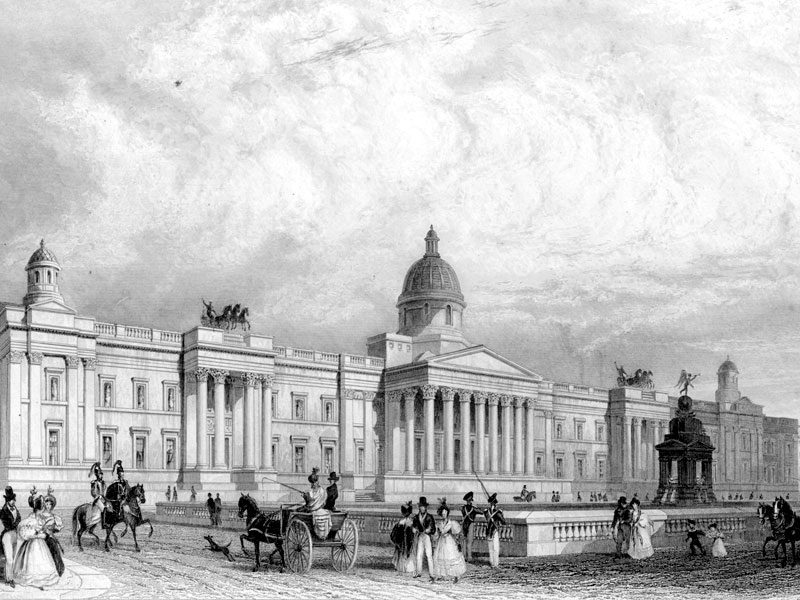