For insight into what ‘global’ meant in times before globalisation, we have the Silk Road. A network of sometimes secure and other times fraught traders’ tracks crisscrossed 2,000 years of civilisation between the Mediterranean, India and China, and in the middle, the cities of Central Asia caught glimpses of the world on all sides. These cities and their transregional interactions across Eurasia gave shape to important phenomena, such as Sufism, the Mongol Empire, and Uyghur culture, and left their mark on world history.

This series explores key social, cultural and political forces created by Silk Road connectedness through the stories of six Central Asian archaeological sites, presenting new perspectives on the ways in which they remain relevant in modern consciousness.

They take place every Monday and Wednesday from 17 May to 2 June at 4.30pm GMT+1 (11.30am EDT) and, including Q&A, will probably last just under an hour. They are available for viewing for eight weeks after the last episode is streamed (28 July).

1. Dayakhatyn Caravanserai (Turkmenistan): What was the Silk Road? (17th May)

Intricate Seljuk brickwork and kufic inscriptions incorporating the names of the Prophet Mohammed’s earliest successors point to the significance of this 11th-century caravanserai as a resting place designed for the most elite medieval clientele. The ruins on the Oxus River, near the border with Uzbekistan, are an apt starting point to explore what the Silk Road actually was, how the name arose, what silk had to do with it, and what exactly the travellers and traders were doing.

Further up the Oxus, the city of Termez commands the crossing-point between Afghanistan and Uzbekistan. Here, a ruined stupa situated yards from a major (and still operating) Sufi shrine speak to the remarkable ways in which religions spread and were mixed across trading routes; faith was perhaps the most readily-transported intangible commodity on the Silk Road. This talk explores what that meant for Buddhism in the wake of Alexander’s conquest of the region, and how Sufism can be traced to the merging of Buddhism and Islam in Central Asian towns conquered by the Caliphate.

3. Turfan (China): The Uyghurs before Xinjiang (24th May)

Situated between the Gobi and Taklamakan Deserts, the Turfan Oasis was a key refuge for China-bound trade, and the furthermost outpost of Chinese imperial control before modern times. But from a medieval Central Asian perspective, Turfan was ideally in the middle, a node connecting Muslim and Chinese worlds, and heartland of various Turkic empires, including the Uyghurs. Before the Chinese established Xinjiang (lit. ‘New Frontier’), the Uyghurs ran an empire from Kazakhstan to Mongolia and adopted an Iraqi religion that mixed Christianity and Zoroastrianism, which was brought to them via trade.

4. Bukhara (Uzbekistan): Cash and Vikings on the Silk Road (26th May)

When Bukhara was a capital of the Samanid empire, it was a major silver mint, and it is estimated that 125 million Samanid silver coins entered northern Europe in the tenth century thanks to Swedish-Viking traders valuing the high-quality Bukharan silver. From the Silk Road perspective, Muslim travellers into Russia wrote the earliest extant texts about Viking society too. This lecture will discuss the economics of the Silk Road, what happened to the money, and how the Viking ‘other’ was perceived by Muslims.

5. Khotan (China): The backstory to Mongol Success (31st May)

The success of the Mongols owes much to socio-political trends that began over 300 years before their conquests in Central Asia, China and the Middle East in the early 1200s. The model for organising campaigns and a semi-nomadic empire was well established through experimentation by various pre-Mongol states, notably the Western Liao who had a capital at Khotan at the southern reaches of the Taklamakan Desert in the 1100s. Their legacies and the ways the Mongols emulated these prior empires will help explain why the Mongols enjoyed such seemingly unprecedented success.

The blue-tiled palaces and madrasas of Khiva and its mud-brick houses seem quintessentially medieval, but in fact they date mostly to the Victorian era. The Khanate of Khiva was the last in the line of the venerable forms of kingship that had controlled Central Asia uninterruptedly since AD 1000, and Khiva was the also last slave-trading state on the Silk Road. This lecture explores the human-commodity angle of Silk Road trade and the interactions of Europeans who arrived in Central Asian cities first as slaves, then as conquerors, and thereby closed the history of the classic Silk Road Eurasian empires. 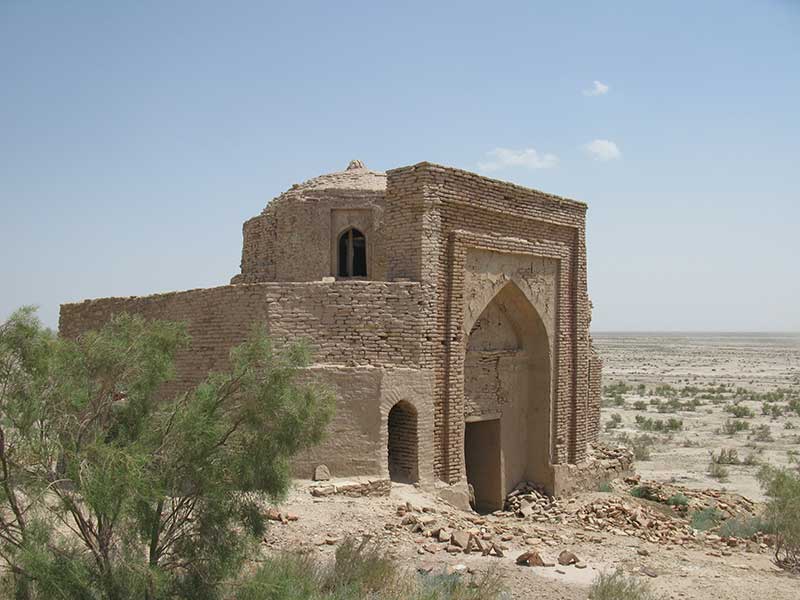