Top 10 Places to Visit in Argentina

The largest Spanish-speaking country in the world and home to a dizzying array of sights, it is difficult to narrow down your options when planning a tour of Argentina. These ten suggestions aim to get to the heart of a rich and fascinating heritage.

Argentina’s capital, Buenos Aires, is a natural starting point for anyone interested in the country's history, politics, art and music: A guided tour of the beautiful Casa Rosada, seat of the Argentinian government, provides the perfect introduction to the country's politics, in particular the controversial Perón years as Evita and Juan Domingo are heavily represented on paintings and photos inside. Outside on the Plaza de Mayo, the city's main square, where white headscarves have been painted on the ground, we are reminded of the Madres of the Plaza de Mayo movement who sought to protest against the military dictatorship of 1976–83 that kidnapped and took the lives of their children, young adults that opposed the regime. The Madres still march in the square every Thursday, both to commemorate this tragic history and to protest against current social issues.

A visit to La Recoleta Cemetery, with its architecturally impressive and ornate tombs, from Art Nouveau to Neoclassical, provokes more study of the country's leaders and cultural figures. Evita Perón is buried here, somewhat ironically among the rich and powerful figures that she would have opposed.

3. World-class art collections of the Capital

Buenos Aires is home to some fantastic art galleries, the Museo de Bellas Artes, MALBA and the Colección Fortabat to name just three. The works provide further insight into the country's turbulent history, such as Ernesto de la Cárcova's Sin pan y sin trabajo (without bread and without work, 1893) that reflects the economic struggles of the late 19th century, a theme later recalled by Antonio Berni in 1934. Elsewhere it is interesting to compare the colourful works of Xul Solar (1887–1963) with those of Kandinsky and Klee, while cubist works by Emilio Pettoruti (1892–1971) are exhibited alongside Picasso's.

4. Witness a Tango show in its hometown Tango had its roots in Buenos Aires and is believed to consist of a range of dance styles, influenced by the wide range of races residing in the capital in the 19th century: a mix of flamenco, habanera, African dance, polka and mazurka. One cannot fail to be bewitched by the sensual and complex moves and the enticing music of Carlos Gardel or Astor Piazzolla and experiencing tango in some shape or form is essential. Sadly, many shows are extremely touristy and commercial, so Martin Randall Travel aims to arrange a private demonstration for its participants, perhaps in the famous Café Tortoni, frequented by Gardel himself.

5. Classical music at the Teatro Colón

A different kind of music can be experienced at the wonderfully decadent Teatro Colón, with its eclectic French and Italian Renaissance style architecture. Deemed to be one of the world's best acoustics, the theatre hosts prestigious opera, ballet and concert performances.

Outside of the capital in the Pampas grassland it is interesting to learn about gaucho history and culture in the delightful town of San Antonio de Areco, home to renowned silversmiths. An Argentine beef lunch, grilled in front of you at a beautiful estancia in the countryside surrounded by horses and cattle completes the experience.

Leaving the capital city and travelling north-west allows us to trace the history of the Camino Real, the Spanish invasion and pre-Columbian civilizations:

Moving further north and west we reach the beautiful town of Salta with its fine colonial and neo-classical architecture. Its excellent archaeological museum presents the inconceivable Inca ritual of child sacrifice. South of Salta we find the dramatic Calchaquí valleys with constantly changing scenery and fascinating geology. Long drives are far from dull as you travel from lush green countryside to deep red mountains and through fields covered in thousands of giant cacti.

10. Vineyards of the North While many visitors head for Mendoza to taste the country's most famous export, we recommend sampling the excellent wines of Cafayate and Bodegas Colomé, whose grapes grow in the world's highest vineyards at up to 3100 metres above sea level. Daytime warmth allows for extremely successful photosynthesis and then retention of essential nutrients when the leaves close their stomata during the cool nights. The result is incredibly aromatic and flavourful wines.

View the itinerary for our tour of Argentina, featuring the above and more, in October 2018. The lecturer is Chris Moss, journalist, author and former resident of Buenos Aires.

View itinerary for The Making of Argentina

View all tours to the Americas 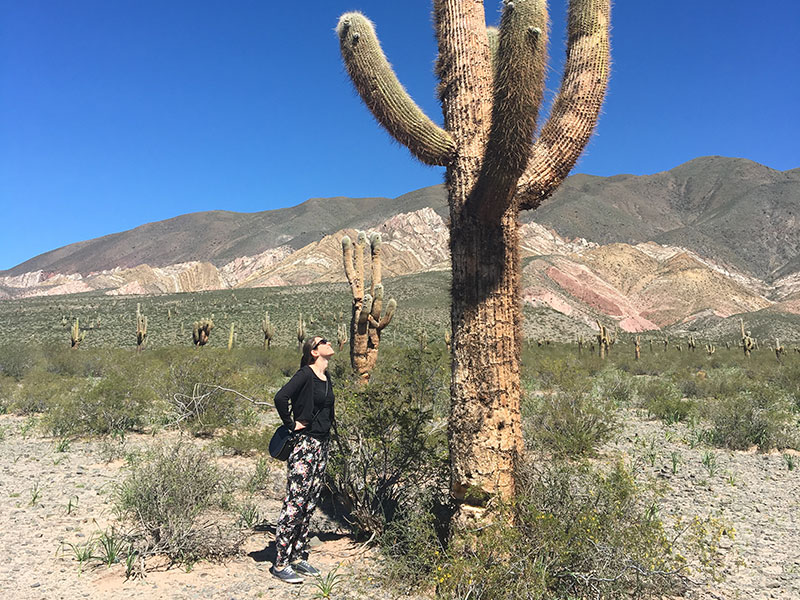