The shock of the new: a Renaissance gem in Trogir cathedral, by Dr Ffiona Gilmore-Eaves

Elongated and elegant, the saints look down from their shell-headed niches. Below them the mood is boisterous. I’ve visited the chapel of the Blessed Giovanni Orsini, or Ivan Trogirski, many times but now the putti who burst out of half-open doors, torches aflame, seem even more riotous. Some have scaled the columns that frame the saints’ niches, and sit on the capitals, pretending to support the cornice. A detail of the putti holding up the cornice.

It’s the brilliant whiteness of the stone, shining like polished marble after thorough cleaning and conservation by a joint Italian-Croatian project, that has awoken saints and putti. The overlay of black soot from thousands of candles has been removed from the ceiling too, allowing us to see how it mimics the cassetted ceiling of the Temple of Jupiter in Diocletian’s palace in nearby Split, still intact to roof height. Temple of Jupiter: the cassetted ceiling.

The identities of the master-craftsmen who planned this daring scheme are known to us from the contract drawn up in 1468. They were artists at the peak of their profession. Andrija Aleši, born in Durazzo (now Durres, Albania), had created the exquisite baptistery in the tiny space at the end of the narthex of this cathedral and worked all along the Adriatic seaboard. Nikola Firentinac, or Nicolo Fiorentino, thought to have studied with Donatello, has been hailed as one of the major sculptors of the Italian Renaissance.

Both undertook domestic work as well; projects such as the mansion of one of the commissioning signatories, Koriolanus Ćipiko. Strolling through the square beside the cathedral, you can’t fail to notice the ebullient Flowery Gothic windows designed by Aleši which distinguish the palaca Ćipiko as being of the latest style and in the most refined taste. Koriolanus Cipico was part of the network of humanists and scholars which spanned north Italy and the Adriatic coast. His framework of knowledge and taste would easily encompass putti who might have escaped from the decoration of a Roman funerary monument, and a homage to the master-masons of Diocletian’s palace: classical art given full respect but repurposed in a Christian context.

There is a question that struck me, though, when the chapel re-opened upon completion of the conservation project, and one looked at this astonishing work in its pristine state as if seeing it for the first time. What did the rest of the citizenry, beyond the elite of noble families and scholars, make of these frankly pagan references? Igor Fisković proposed that the apparent mismatch of Christian and Classical was deliberate, part of a plan to rally support from all quarters of Italy and beyond against a threat felt daily by towns such as Trogir, but unrecognised in most of Europe. After the fall of Constantinople in 1453, Ottoman armies had overrun much of the Balkans: Bosnia fell in 1463. Turkish forces lurked in the mountains that overlook the coastal strip.

Was this indeed a factor in the choice of iconography for the new home of the Blessed Ivan, he who as bishop of the town in 1105 repulsed the besieging forces of Koloman of Hungary by demolishing their battering-ram with a single slingshot? And would sailor Ivan or seamstress Ana, gaping at the saint’s new home when they attended celebrations on his feast day, November 14th, have born this in mind?

Signup to our e-newsletter 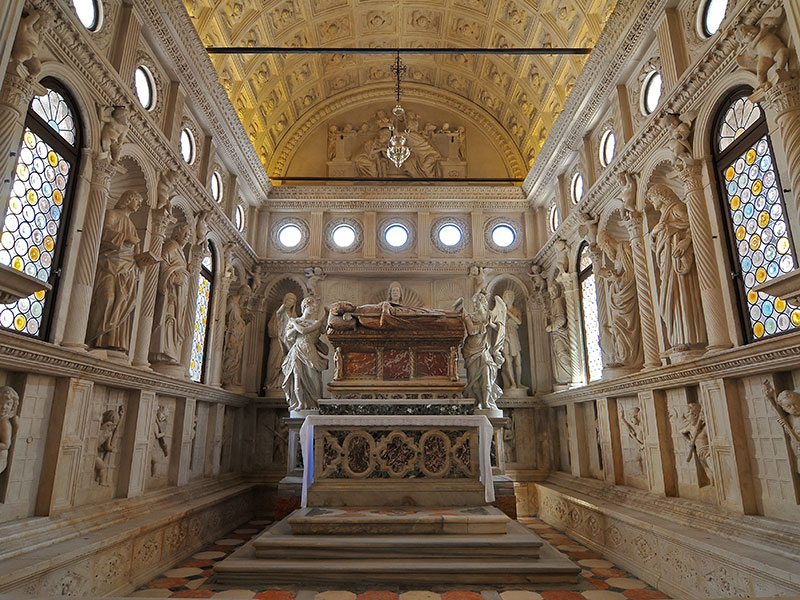