The Admiralty is a landmark that visitors to St Petersburg find easily: its tower is the focal point of a trident made up of three central thoroughfares. The idea of this trivium may have been derived from Versailles or Rome but in St Petersburg it was reinterpreted: the three ‘rays’ radiate from the building of a shipyard, thereby emphasising its importance. Indeed, Peter the Great’s mission for his new capital was first and foremost to give access to the sea, and the Admiralty, founded by the tsar in 1704, provided both the ships and the administration for the navy. As St Petersburg gradually took shape, the Admiralty formed the core of its layout: today the vast edifice completes a stunning ensemble of the central squares and neighbours the Hermitage, St Isaac’s Cathedral and Falconet’s monument to Peter the Great.

In the early nineteenth century, the architect Andreian Zakharov rebuilt the Admiralty in Neoclassical style inspired by his French teacher Chalgrin and by the visionary architecture of Boullée. The existing tower was incorporated into the new design: there emerged an eye-catching motif of the gilded spire recalling a mast and rising above a classical temple. The poet Osip Mandel’shtam saw it as ‘a frigate or an acropolis, shining from the distance’. The ample sculptural decoration glorifies daring adventure of conquering the sea. A weather vane in the shape of a three-masted ship, a symbol of the city, tops the spire. The ionic colonnade is decorated with statues of the four winds, the four seasons, the four elements, the goddess of astronomy Urania and Isis, the Egyptian goddess of sailors. The sculptures of Achilles, Ajax, King Pyrrhus and Alexander the Great at the corners above the attic encourage fearless endeavours. The long bas-relief celebrates ‘the creation of the Russian fleet’. The central part of this detailed composition represents Neptune handing his trident to Peter the Great. The triumphal arch with genii of glory above it is flanked by the groups of nymphs carrying spheres. The message is clear: Russia has become a maritime nation with global reach. As a matter of fact the first Russian circumnavigation took place in 1803-1806 and the Russian South Pole Expedition discovered the first land within the Antarctic Circle, Peter I island, in 1819. The building of the Admiralty is an eloquent expression of self-confidence of a rising seafaring power. 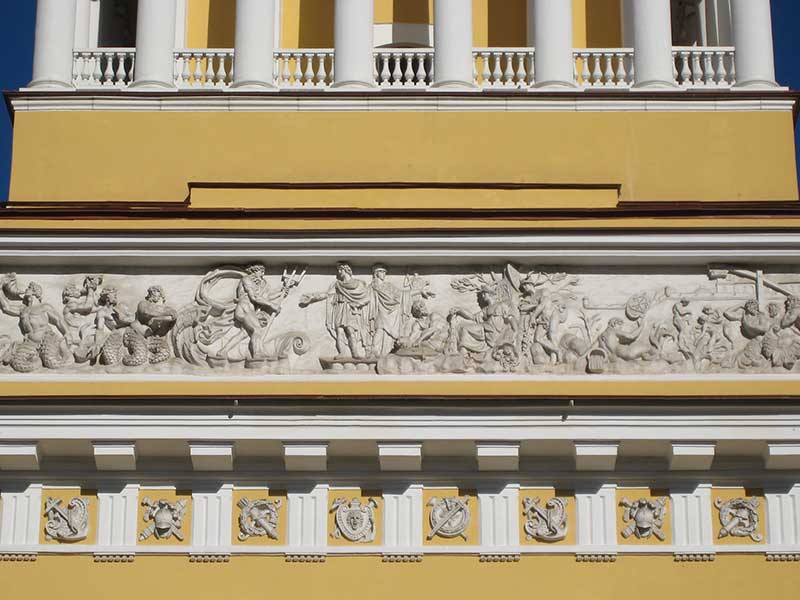