This April, Senior Marketing Executive Lucy Emanuel spent five days in Armenia as part of a familiarisation trip. Below, she describes five of the sites she visited: Although Mount Ararat now resides in Turkey, it remains an important symbol to Armenians. The immense snow-capped peaks watch over Yerevan, reminding residents of their ties to Christianity. It was said that Noah’s Ark’s final landing place was on the summit of Ararat, signifying a new beginning and hope. Ararat’s association with good fortune continues today and the peaks are depicted on many logos, from Armenia’s national football team to a local brandy company. For the best view of Mount Ararat, drive towards Geghard monastery, stopping just after Jrvezh forest park. With clear skies and fresh air, the view overlooking Yerevan towards Mount Ararat is truly magnificent.

Nestled within a rugged gorge in Kotayk provence lays Geghard Monastery. Upon arrival, tatiks (grandmothers) with gold-plated teeth warmly greet visitors with a freshly baked sweet bread called gata. The path leading to the monastery is lined with khachkars - large, rectangular stones engraved with ornate crosses and pagan-influenced botanic designs. Framed by an archway entrance, the dark stone of the monastery mirrors the jagged mountain behind. Partially carved from the rock face, there has been a monastery on the site since the 4th-century. The main chapel was built in 1215 by the Zakarians, whose family emblem of a lion attacking an ox can still be seen above the doorway (see above image). The dark stone and carvings continue inside, with shards of light illuminating the patterned dome. The Martin Randall Travel Armenia tour to Geghard in June 2017 will be enhanced further by a special musical performance of the Armenian Divine Liturgy by the Garni choir. Garni temple is Armenia’s only Graeco–Roman style building, set at the edge of a gorge overlooking the Azat River. The temple was likely to have been built by King Trdat I in the first century AD and dedicated to the sun god, Mitra. Although largely damaged following an earthquake in 1679, the temple was carefully restored between 1969–1975 and makes a striking contrast to the predominant architecture of Armenian Apostolic churches in the region. Despite its touristic surroundings, Lake Sevan retains its natural beauty, especially when you escape the crowds by walking past the Sevanavank churches towards the peninsula. It is here that the lake almost surrounds you, with snowy mountains in the distance merging into the partly frozen lake. As the largest body of water in Armenia, Lake Sevan still provides much of the country with fish. In fact, it was considered a vital food lifeline during the Nagorno-Karabakh War when produce and supplies were extremely scarce. Nowadays, at the height of summer, Yerevan residents escape the heat of the city to swim in Lake Sevan’s cooling waters. Overlooking central Yerevan in Victory Park stands Mother Armenia, a sculpture of a strong female who represents her nation. Designed by Ara Harutynyan, her defiant pose with sword in hand symbolises peace through strength. Previously it was a statue of Stalin, who watched over the city from Victory Park. Evidence of Armenia’s Soviet past can still be seen on the basalt base as well as in the uniform buildings throughout the city below. From the spring of 1962, Stalin was replaced by Mother Armenia, who has stood resolutely over the city ever since. She overlooks the city below, Mount Ararat and the poignant Armenian Genocide Memorial Park sculpture. She encapsulates the nation: standing united, defiant and proud despite a troubled past. 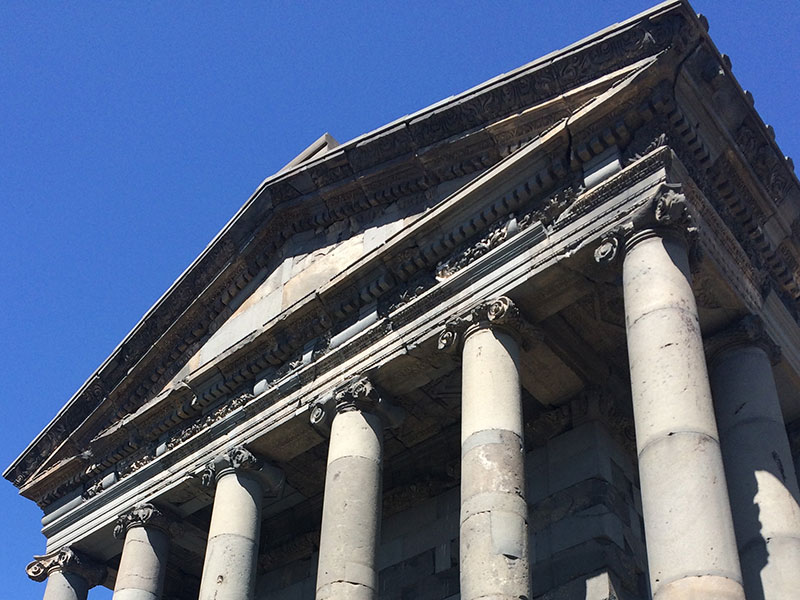