Bauhaus - The birth of modern architecture and design

The art, design and architecture of last century’s most influential art school.

The Bauhaus celebrated its centenary in 2019, resulting in the building of brand-new museums in Weimar and Dessau.

The Bauhaus was unquestionably the most influential art school of the twentieth century. Much of the look of the modern world has been shaped by its principles and practices. The artists, architects and designers associated with the Bauhaus have exerted an enormous influence, on the modern movement and on art education in many parts of the world. Chief among them were Walter Gropius and Mies van der Rohe (both directors of the school), Josef Albers, Marcel Breuer, Lyonel Feininger, Wassily Kandinsky, Paul Klee, Oskar Schlemmer and László Moholy-Nagy.

The influence of the Bauhaus is all the more astonishing since its life was brief – it lasted just fourteen years – and its history turbulent and tragic. Though widely admired internationally from the outset, the school was subjected to constant stresses and strains, from ideological and political opponents, economic crises and governmental interference. Founded in Weimar in 1919, it was forced to relocate first to Dessau and then to Berlin, where, in 1933, it met an ignominious end at the hands of Nazi stormtroopers. Ironically, its closure speeded the rapid world-wide dissemination of its ideas and designs as many of its masters and students fled abroad.

The Bauhaus wanted to eradicate the distinction between artist and craftsman, to stimulate the natural creativity of its students, to understand and exploit fully the inherent qualities of natural and man-made materials, and, above all, to design objects for industrial mass production in a way which took account both of aesthetics and economy. There were constant, often heated debates: between the Expressionists and the Constructivists; the craftsmen and the industrial designers; between the apolitical and the politically engaged. The intellectual energy generated by these debates contributed to an enormously creative atmosphere.

By studying the surviving work produced at this educational hothouse in the places in which it was made, unique insights can be gained into the nature of our own man-made environment and the development of modernism. This tour visits all the most important sites, some by special arrangement, of the Bauhaus schools and of buildings designed and furnished by the school’s workshops.

Weimar. Fly at c. 09.30am from London Heathrow to Frankfurt (Lufthansa). Drive to Weimar, the lovely small court city which as home to Goethe, Schiller, Liszt and other luminaries was a centre of the German enlightenment; the constitution of 1919 was drawn up in the town which gave its name to the ill-fated Republic whose dates coincide with those of the Bauhaus. Visit the Haus am Horn, built and furnished by the Bauhaus workshops. First of two nights in Weimar.

Weimar. Visit the original Bauhaus Building by the Belgian Henry van de Velde (1904–5), then director of the school of arts and crafts which was predecessor to the Bauhaus; this contains reconstructed Bauhaus work destroyed by the Nazis (murals and reliefs by Schlemmer, Herbert Bayer and Joost Schmidt). Visit the Bauhaus Museum and Gropius’s Expressionist, abstract Trades Union Monument. Overnight Weimar.

Weimar, Dessau. Visit the Neues Bauhaus Museum, which opened to critical acclaim in 2019. Drive to Dessau, whose mayor succeeded in securing the Bauhaus in 1923 after nationalist forces evicted it from Weimar. See the Törten Estate (Gropius, Meyer and Muche) before driving on to the hotel. First of two nights in Dessau.

Dessau. Visit the restored Bauhaus Building (1926), designed by Walter Gropius, incorporating student accommodation, a workshop wing with a spectacular glass wall, a theatre and a canteen, alongside special commemorative exhibitions. View other Bauhaus buildings in Dessau, among them the Master’s Houses (Gropius), and the Labour Exchange (Gropius). Overnight Dessau.

Dessau, Potsdam, Berlin. See the New Bauhaus Museum in Dessau, another opening in 2019 to coincide with the centenary year. The Einstein Tower in Potsdam by Erich Mendelsohn is the outstanding example of Expressionist architecture, a style with which various Bauhaus masters flirted. En route to Berlin, see Bruno Taut’s Waldsiedlung Onkel Toms Hütte estate in Zehlendorf and some early works of Mies van der Rohe. Overnight Berlin.

Berlin. The Bauhaus was closed in 1932 by the Dessau authorities and moved to Berlin, where it survived only six months. There are two major post-war buildings by Bauhaus exiles, the Bauhaus Museum designed by Gropius, and the Neue Nationalgalerie by Mies van der Rohe. See the exteriors of both of these, alongside other architecture with Bauhaus connections. Private visit to a villa designed by Wassily Luckhardt. Fly from Berlin to Heathrow (British Airways), arriving c. 5.30pm.

Please note: because the itinerary is dependent on a number of appointments with private owners, the order and even the content of the tour may vary.

Air travel (economy class) with Lufthansa and British Airways (Aircraft 320 and 319); travel by private coach throughout; hotel accommodation; breakfasts, 1 lunch and 4 dinners with wine, water, coffee; all admissions; all tips for waiters; all state and airport taxes; the services of the lecturer and tour manager.

Dorint Am Goethepark, Weimar: a modern 4-star hotel, situated by the park and on the edge of the town centre. Radisson Blu Fürst Leopold Hotel, Dessau: a 4-star hotel with spacious, modern rooms. Regent Hotel, Berlin: an elegant 5-star hotel decorated in Regency style, located close to Unter den Linden. Single rooms throughout are doubles for sole use.

Quite a lot of walking is required and standing around is unavoidable. Average distance by coach per day: 47 miles. 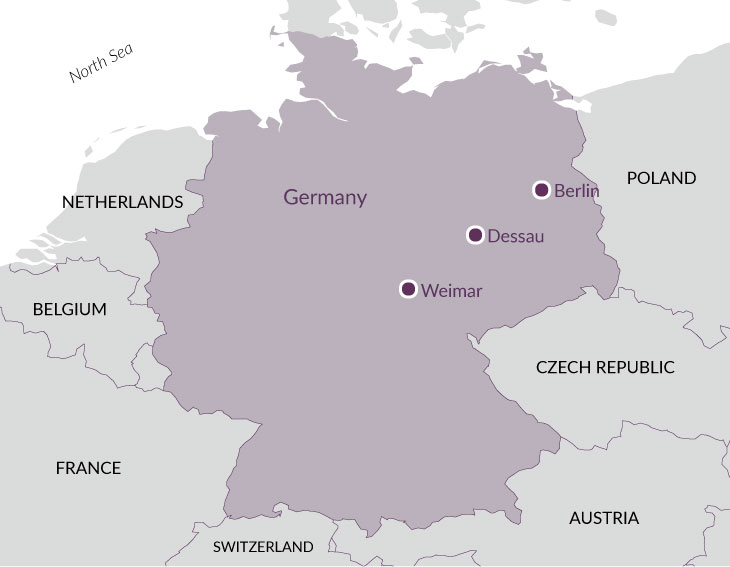