A wide-ranging survey of the most loved period of English architecture and design.

Includes most of the main concentrations of Georgian urban building in southern England.

A dozen important interiors, some with exclusive out-of-hours access.

Based in the Georgian resorts of Bath and Brighton, with excursions by coach and rail.

Georgian buildings have long been a byword for good taste and elegance. It might not be true to say that everyone loves a Georgian house, but it certainly is the case that no one harbours a blanket loathing for all things Georgian in the way that many still abhor Victorian architecture and design. Few sights in an English town are lovelier than a stretch of 18th-century or Regency streetscape

This tour presents many of the finest terraces, squares, mansions and civic buildings in urban England. But it goes beyond merely showing a succession of architectural beauties, for it has a mission to explain how and why these constructions came to be and look as they do through examining such matters as the crafts, skills and materials of the building trade, the complexities and constraints of land ownership and development, the use to which buildings and rooms were put.

The issues of style and taste are central, of course. Why were British houses so different from their counterparts in continental Europe? What impulses or exemplars led to changes in planning and detailing? How is it that so many run-of-the-mill buildings seem so close to perfection? Interiors are a significant ingredient in the tour, with the study of furnishings and decoration, paintwork and colour, heating and lighting, cooking and gardening. Issues around conservation thread through the week, and participants will become expert in spotting later changes and inauthentic features and thereby more appreciative of unspoilt survivors.

The period of the four King Georges (1714–1830) saw Great Britain transformed from an off-shore polity of middling rank to the richest and most respected nation in Europe. A reputation for coarseness, conflict and regicide was supplanted by one of stability, liberty and civility. It was also a time of a deepening sense of national identity which in turn fed through to aesthetics.

Continental styles – assertively grandiloquent, overpoweringly ornamented, oppressively formal – were taken to be the visual manifestation of tyranny, popery and decadence. Britons believed themselves to be free and morally superior, and the ‘simplicité sevère’ of their buildings, their restraint and orderliness, can be presented as a reflection of this. The Englishness of English architecture was a fascinating compound of many factors, as you will discover.

Bath. Start at 2.00pm. Hot springs were the cause of the Roman town, and they continued to attract visitors in the 16th and 17th centuries. They still flow, but it was during the Georgian period that Bath became the most fashionable resort in England and one of the loveliest cities in Europe with uniform terraces, squares and crescents in the Anglo-Palladian mode, all of local honey-coloured stone. The afternoon walk encompasses some of the earliest and finest – Queen’s Square, The Circus and Royal Crescent. First of five nights in Bath.

Bath. The undulating topography enhances the architectural attractions of Bath, giving rise to picturesque compositions and quasi-rural vistas. Begin in the centre around Beauford Square, Bath Street and the Parades, and then see Lansdown Crescent and other later Georgian developments on high ground to the north. Interiors include the Assembly Rooms, a sequence of halls for entertainments, the Guildhall, and No. 1 Royal Crescent, a beautifully restored and furnished high-end house where we have a special out-of-hours visit with the curator.

Cheltenham. Cheltenham Spa is another instance of the Georgian fashion for hydrotherapy creating a new town. Discovered here in 1716, the peak of popularity was reached a century later, resulting in an exceptionally handsome Regency town of cream stucco, elegant crescents and ironwork verandas. Imperial Square, Lansdown Crescent, Montpellier Gardens and Pittville Lawn are among the famous names. Favoured through the 19th century and beyond by retirees, particularly from the army and Indian Civil Service, it has remained prosperous and well maintained.

Trowbridge, Bradford-on-Avon, Bath. Travel by train today. The otherwise unprepossessing market town of Trowbridge retains a dozen ambitious Georgian mansions. Bradford-on-Avon’s fast-flowing river and an influx of Flemish weavers created textile wealth in the 18th century, and many merchants’ mansions and workaday houses have been preserved to create one of the most delightful of England’s smaller towns. Some free time in Bath – the Roman Baths Museum, Gothic Cathedral, Holburne Museum, Museum of Bath Architecture, Herschel Museum etc. await.

Bristol. A cosmopolitan conurbation and vibrant modern city, Bristol possesses some of the grandest Georgian terraces and squares in England. Brick was used early in the period (Queen Square), stucco came later, but stone is the commonest material. In the medieval core there are some splendid Palladian and Greek Revival buildings, notably the Exchange, while on the high ground in Clifton magnificent developments such as Royal York Crescent and Vyvyan Terrace abound. Worcester Terrace and Victoria Square take Classicism into Victoria’s reign.

Salisbury, Goodwood. The journey from Bath to Brighton on the south coast (130 miles) is broken with two lengthy breaks. Mompesson House in the Close at Salisbury was finished in 1700 and the furnishings are largely 18th-century (visit to be confirmed). Time for a brief visit to the cathedral and an independent lunch. Several important 18th-century architects contributed to the evolution of Goodwood House which culminated in the great Regency state apartments by James Wyatt. First of two nights in Brighton.

Brighton, Hove. The future Prince Regent’s visit to Brighton in 1786 sparked a life-long affection for the place, in turn inspiring the transformation of a fishing village into England’s fastest growing town. Continuous Hove began as a resort in the 1820s. Both consist of gracious streets and squares, rippling with bow windows to facilitate sea views. The gradual and immaculate restoration of The Regency Town House in Brunswick Square provides unparalleled insight into domestic decoration and services.

Brighton, Hove. A further walk through Georgian streets and squares. The last visit is to Brighton Pavilion, the most flamboyant of Regency buildings and one of the most astonishing residential creations in Britain. The Prince Regent commissioned Henry Holland to extend a farmhouse into a holiday home, and subsequently John Nash transformed this seaside hideaway into a regal palace with extraordinarily lavish and exotic decoration. The tour ends in Brighton at 1.00pm.

Accommodation as described below; travel by private coach, train and taxi; breakfasts and five dinners with wine, water, coffee; admission to houses and museums visited as a group; all tips; all taxes; the services of the speaker and tour manager.

There is quite a lot of walking on the tour. You ought to be able to walk at about three miles an hour for up to half an hour, and to walk at least three miles in a day. There are urban hills and the uneven surfaces of historic paving. Average daily distance by coach: 34 miles. 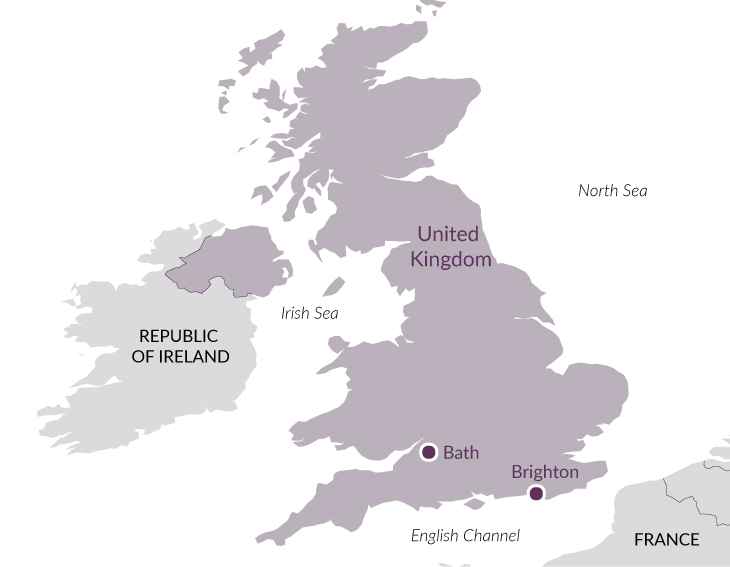