I was hugely excited to return to Georgia last month after almost three years. For a quarter of a century, this country has been a second home for me, and I have old friends and colleagues to meet. I am also leading Georgia Uncovered – treasures of the Southern Caucasus for MRT this September. It is a tour I have taken many times before and I was keen to see how the country had weathered the pandemic.

Much remains the same. Georgia’s bountiful natural beauty is undiminished. Snow sparkles on Europe’s highest mountains, and the upland pastures are full of flowers. In the fertile lowlands, the growing season is well advanced and both market stalls and the feasting table are full of colourful displays. Georgians richly deserve their reputation for warm hospitality, a delicious, distinctive cuisine and inimitable local wines.

Georgia’s historic sites have also fared well in lockdown. Sites that were being renovated in 2019 have reopened, such as Vani – the first millennium BC gold-bearing temple-city whose remarkable Colchian and Hellenistic treasures fill the Georgian National Museum’s gold-rooms. My own site, the fortress of Nokalakevi-Archaeopolis, where in the sixth century AD the Emperor Justinian’s generals defeated a Sasanian advance to the Black Sea, has seen new paths laid out, a ‘Medea’s herbal garden’, good toilets (essential touristic infrastructure), and sculptural ghosts of Sasanian and Roman soldiers scattered around the battlements. Government road-building continues to reduce times between sites that are uncrowded, compared with before lockdown. It is unlikely this luxury will last indefinitely.

Georgia has a well-deserved reputation as a must-visit destination. It is a land whose long history and archaeology span the ages. It has the earliest well-dated hominin fossils in Europe. Its culture has been shaped by long contact with the peoples of the Near East. The Neolithic domestication of plants (including grapes, and wine production) and animals precedes the equivalent revolution in NW Europe by some two millennia. It was an early centre for metallurgy. Throughout its history it has stood at the critical interface between empires: the Romans, Byzantines and Ottomans to the West, and the Parthians, Sasanid Persians, Arab Caliphate and Safavids to the South and East. North, beyond the Greater Caucasus mountains, the vast Eurasian steppe unfolds across the continent, home of the nomad powers, until Russia claimed it following the gunpowder revolution. Today, Georgia sits between NATO and Russia, on one of the most important gas and oil pipeline routes in the world.

And yet it is the rhythm, the periodicity of its history that makes it so attractive to the visitor. Its great ecclesiastical monuments are the product of early Christianisation: – a unique alphabet, created to promote Christianity in the early fifth century; the distinctive domed churches and monasteries that were developed from the late sixth century; and the grand cathedrals and monastic academies of the early 11th century. A magnificent tradition of folk and ecclesiastical polyphony exists, that Tsarist- and Soviet-era choirmasters consolidated into a national art form. In the late 19th and early 20th centuries, the marriage of oriental architecture with the latest European trends in Art Nouveau, left Georgia with a legacy of buildings that late Soviet austerity and under-investment has failed to erase.

Its people belong neither to Europe, nor Asia, but stand in a place in-between – the South Caucasus. Come and explore it with me!

'Ian Colvin – marvellous! Friendly, easy to listen to, relaxed manner. Made me feel completely included, despite my total lack of knowledge!'

'Everything slotted into place, as if by (carefully worked out) magic. Ian's enthusiasm for the history of Georgia was hugely infectious.' 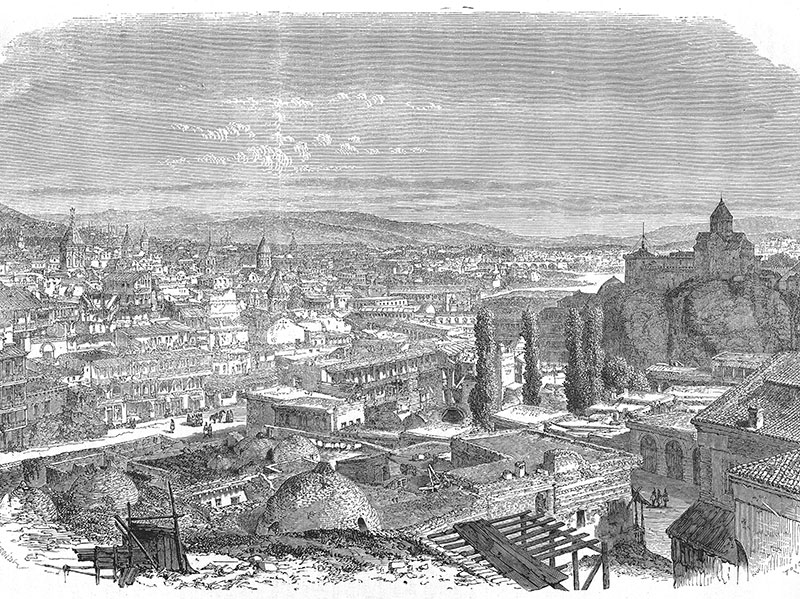