A fascinating selection of places which have the common feature of relating to the last years of the Raj.

Shimla, the grandest hill station, the buildings a hotch-potch of bastardised European styles. Reached by the famous mountain ‘toy train’.

Both the high noon of the British Empire in India and its closing years were played out in the city of Delhi and in the ‘summer capital’, Shimla (formerly Simla), dubbed by many the grandest outpost of the Pax Britannica. Tracing the ebb and flow of the Raj in two imperial capitals, this tour covers architecture, events, lifestyles, and landscapes of the Western Himalaya and numerous stories of places and people. Amritsar is part of this story, and Chandigarh provides a glimpse into Indian Utopia after Independence.

Built, destroyed and rebuilt a dozen times, Delhi is one of the oldest cities in the world, and also one of the most multilayered. It is home to some fifteen million people and its heterogeneous population has genetic strands that span the Indian subcontinent, Central Asia and several other parts of the world. Today, towers of chrome and steel stand side by side with centuries-old monuments built by the Mughal rulers. Between the two, the immense architectural momentum of the Raj culminated in the creation of New Delhi, still the core of this fast-expanding city.

Up in the hills of the Western Himalaya, Shimla was the summer capital of British India, the grandest of the British hill stations. For around a century, a fifth of the human race was ruled from its heights for the better part of every year. The architecture is practically a gazetteer of western styles, but often with a twist, a nod to the heritage of the subcontinent.

The town created an enigmatic way of life and the steamier side of its social world gave inspiration to Rudyard Kipling, who as a young correspondent spent some summers amidst the cedars. Many decisions that shaped India and the region were made within sight of the snow-clad Himalayas. Today it is the capital of the state of Himachal Pradesh and many of the grander buildings, bungalows and streets still evoke the heyday of a past age.

West of it lies the fertile ‘Land of Five Rivers’, the Punjab. Here is the sacred city of Amritsar, site of the Golden Temple, the most sacred shrine of the Sikh faith. This was also where the Jallianwala Bagh massacre took place in 1919, when a crowd of unarmed civilians was fired upon. The event totally altered the face of Indian nationalism. Rabindranath Tagore was moved enough to renounce his knighthood, condemning the atrocity as ‘without parallel in the history of civilised governments’.

The border with Pakistan is close to Amritsar, and with belligerence which is almost histrionic, the sundown ceremony of lowering the flags and closing the gates is played out daily. Nearby is the former princely state of Kapurthala where the Francophile ruler, Jagatjit Singh, completed a palace in 1908, loosely modelled on Versailles. He tried to introduce French as his court language.

When the Punjab was divided between India and Pakistan in 1947 the state capital Lahore was replaced in the Indian portion by a brand new city, Chandigarh. Its building in the 1950s was a deliberate break with the past. Prime Minister Jawaharlal Nehru called it ‘a new city of free India, totally fresh and wholly responsive to the future generations of this great country.’ Led by Le Corbusier, the city design and urban elements were unabashedly modern and western. Still admired and criticized in equal measure by planners, architects and urban historians, it is yet rated as among the best cities in India in which to live.

Delhi. Rooms are available at the hotel from 2.00pm on the 13th March, allowing for an early check-in. Nothing is planned before a pre-lunch talk. In the afternoon, visit Old Delhi for a short walk on The Ridge, taking in Flagstaff Tower, a safe haven for the British during the Indian Rebellion of 1857. The memorial commemorating those killed in action is a Neo-Gothic spire with elements of Indian design. First of two nights in Delhi.

Delhi. New Delhi was created 1912–31 by Lutyens, Baker and others as a uniquely grand and spacious city. The Secretariat buildings on Raisina Hill are Classical at first glance, but closer inspection reveals Buddhist and Mughal motifs. Subject to special permission, it may be possible to visit the interior of the vast Rashtrapati Bhavan, the former Viceroy’s residence. The fortress-like garrison church of St Martin, designed by Arthur Shoosmith (1930), has been called one of the great buildings of the 20th century.

Delhi to Amritsar. The Teen Murthi Bhavan was built in Classical style in the 1930s as Flagstaff House before becoming the home of the first Indian prime minister, Jawaharlal Nehru. Today, it is a museum dedicated to one of the fathers of modern India. Fly from Delhi to Amritsar in the afternoon. First of two nights in Amritsar.

Amritsar, Wagah. Amritsar was founded by the 4th Sikh guru in 1579 and is home to Sikhism’s holiest shrine, the Golden Temple. The sacred lake surrounding the temple dates from this period but the current form of the temple is 18th century, and the gilt early 19th century. Jallianwala Bagh was the scene of the massacre of demonstrators against British rule in 1919 and now is a moving memorial garden. In the afternoon, drive to Wagah for the theatrical sunset closing ceremony of the border with Pakistan.

Amritsar, Kapurthala, Chandigarh. In the morning, visit the poignant Partition Museum which has gathered a collection of personal artefacts, oral histories and artwork memorialising the experiences of the millions affected by one of the largest migrations in human history. Drive on to Kapurthala, where the local ruler, an ardent francophile, built his palace (1900–1908) loosely modelled on the palace of Versailles and the chateau of Fontainebleau. Now a boys’ school, the interior is lavish, while the gardens are embellished by fountains and statuary in the traditional French style. Continue to Chandigarh to arrive at the hotel in time for dinner. First of two nights in Chandigarh.

Chandigarh. The joint capital of the states of Haryana and Punjab emerged from the partition of the Punjab in 1947. Conceived by Le Corbusier and Maxwell Fry following the principles of the International Modern movement, it is laid out on the grid principle. The Capital Complex is the home of the administrative buildings, the ‘head’ of the city and some of Le Corbusier’s most ambitious planning.

Chandigarh, Shimla. Transfer to Kalka in the foothills of the Himalayas to board the ‘toy train’ to Shimla. The Kalka–Shimla Railway has been operating daily since 1903 and is a remarkable feat of engineering. After a 3½-hour ride through stunning scenery, transfer to the hotel. First of three nights in Shimla.

Shimla, Mashobra. The former summer capital of British India, Shimla is set in the lush pine and cedar forests of the Himalayan foothills. Its impressive colonial architecture is best admired through walks along the Mall. Viceregal Lodge, the summer residence of the British viceroy is probably Shimla’s best-known building. Built in 1888, the grey sandstone structure retains the British royal coat of arms on its façade. After lunch at Wildflower Hall, visit Bishop Cotton School, Shimla’s oldest educational institution, founded in 1859.

Shimla. Walk eastward along The Mall towards Christ Church. The Gaiety Theatre was built in 1887 as the original Town Hall. The Gothic building has been the centre of Shimla’s social life for over a century. The tower of Christ Church (1857) dominates Shimla’s skyline from the Ridge, above the town. Time for independent exploration in the afternoon.

Chandigarh to Delhi. In the morning, fly to Delhi. Coronation Park in north Delhi was the location of  the 1911 Durbar, at which George V announced the shift of the British capital from Kolkata. Following Independence, it became the resting place of the statues of kings and officials of the British Raj. Overnight Delhi.

Delhi. Car transfers to Delhi airport can be arranged for your onward journey. 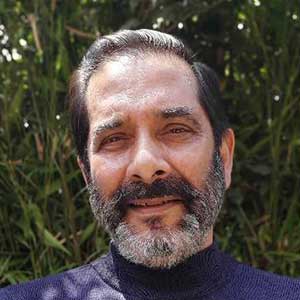 Award winning author, historian and journalist. He has published 15 books of history, travel, fiction and poetry and is a recognised authority on the Indian state of Himachal Pradesh and its capital, Shimla. He has handled assignments for television, including for the BBC, and for the Indian Institute of Advanced Study and various departments of the Indian Government. He writes regularly for magazines and papers in India and elsewhere. He is the state Co-convenor of the Indian National Trust for Art and Cultural Heritage.

Flights with IndiGo Airlines: Delhi to Amritsar and with Air India: Chandigarh to Delhi; travel by private air-conditioned coach, people carriers and one journey by train from Kalka to Kandaghat (near Shimla); accommodation as described below; breakfasts, 9 lunches (including 1 packed lunch) and 8 dinners with wine or beer, water, coffee, tea; all admissions; all tips; the services of the lecturer, tour manager and local guides.

Flights from London to Delhi are not included in the price of the tour. We will send the recommended flight options when they come into range (by April 2022) and ask that you make your own flight reservation.

Required for most British nationals, and not included in the tour price. We will advise all participants of the process.

Taj Mahal Hotel, New Delhi: a modern and comfortable hotel with an attractive garden and swimming pool. The hotel is well-situated in the heart of Lutyens’s Delhi and caters for both the business and leisure traveller. Taj Swarna, Amritsar: a 5-star contemporary hotel opened in January 2017 in the centre of Amritsar. Taj Chandigarh, Chandigarh: a modern 5-star hotel with elegantly furnished and well-appointed rooms. The Oberoi Cecil, Shimla: a landmark 19th-century 5-star heritage hotel converted into a luxury hotel in the 1930s.

A good level of fitness is essential. Unless you enjoy entirely unimpaired mobility, cope with everyday walking and stair-climbing without difficulty and are reliably sure-footed, this tour is not for you.

A rough indication of the minimum level of fitness required is that you ought to be able to walk briskly at about three miles per hour for at least half an hour, and undertake a walk at a more leisurely pace for an hour or two unaided. Uneven ground and irregular paving are standard. There are some steep walks. Unruly traffic and the busy streets of larger cities require some vigilance.

There is a lengthy train journey during which facilities are limited and may be of poor quality. Most sites have some shade but the Indian sun is strong, even in the cooler seasons.

'A wonderful holiday which has informed me about India and inspired me to learn more and visit again. Thank you to all involved.'

'A varied and interesting trip which has given me a much clearer view of this fascinating country.'

'The food was some of the best I’ve had in India'.