In this, an extended feature, MRT’s Miles Rowland speaks to historian Terry Charman about the life and career of Winston Churchill, and Terry reviews a recent book which takes a novel approach to the British Bulldog, examining his financial troubles.

MGR: As an historian, what is it in particular about Winston Churchill that holds your interest?

TC: Ever since my parents gave me at Christmas 1958 The Happy Warrior, an illustrated life of Churchill that originally appeared in the boys’ magazine Eagle, I have been fascinated by the Greatest Briton. His larger than life personality, his wit and lifestyle, his wide range of interests outside the world of politics, and his stellar role in that world all contribute to that fascination. So too do the quality of his writing and the speeches which still have the power to send shivers down one's spine. But above all, it was his role during the Second World War when by sheer willpower and personality he saved not only his nation as historian A. J. P. Taylor wrote in his English History 1914-1945, but the entire fabric of Western Civilisation. His determination to build and maintain a Grand Alliance to bring down Hitler and the Nazi regime won the grudging admiration of Dr Goebbels himself. And he was quite simply, as Roy Jenkins concluded, 'the greatest human being ever to occupy No 10 Downing Street'.

Churchill endured many peaks and troughs over an erratic career. Why was the Abdication Crisis of 1936 something of a disaster for him and why do you think he stood by Edward VIII?

Churchill's loyal defence of King Edward VIII during the Abdication Crisis was both a temporary political and personal disaster for him. It was done out of both personal loyalty to and friendship for the glamourous and charismatic King, but also as Lady Churchill later said, monarchy was Winston's only religion. The King's love for Wallis Simpson also appealed to the intense romantic streak in Churchill, who was never judgmental or censorious about the sex lives of his peers. And his antipathy towards PM Stanley Baldwin and others on the government front bench must also have played a part.

How crucial was Churchill’s ‘special relationship’ with the USA and Franklin D Roosevelt during the Second World War?

The Special Relationship between the USA and United Kingdom only really works when the two leaders get on together. And during the Second World War both countries, and the Allied cause, were blessed by the fact that Churchill and Roosevelt, both men "nature's aristocrats", hit it off so well. In 1940 Churchill knew that for Britain to survive, American aid and support were going to be vital and he did his utmost to court and woo FDR. But after the two men met in August 1941, there quickly grew up both a genuine personal friendship and mutual fascination which survived, with some vicissitudes, to FDR's death in April 1945 on the eve of victory. "It's fun being in the same decade as you" FDR once telegraphed Churchill, who would have undoubtedly reciprocated the sentiment.

Like many public figures, Churchill is said to have suffered from depression throughout his career. What do you believe was the root of this ‘black dog’ and how did it affect his actions?

Much in recent years has been made of Churchill's 'black dog' depressions. I believe it true to say that the root cause of these was never really worries over financial and similar affairs, but rather a frustration that he was not in a position to control events and situations that were in the hands of lesser men. This was especially true in the late 1930s as we drifted to war and in the First World War after he lost the Admiralty in May 1915. But Churchill's 'black dogs' never lasted that very long and his sense of humour, often rather dark, helped to alleviate them.

Churchill is often remembered as a great orator. Would you say this was his greatest strength as a wartime prime minister?

Churchill once said that words were the thing that last. His wartime speeches, especially those in 1940, still have the capacity to send a shiver down one's spine. As English writer Beverley Nichols wrote of Churchill 'He mobilised the English language and sent it into battle.' One only has to compare Chamberlain's lachrymose and over personal radio speech on the outbreak of war, to Churchill's all inclusive ‘finest hour’ speech, ("Let us brace ourselves to our duties and so bear ourselves....") to see who had the real capacity to lead Britain in war and to victory. His mispronunciations delighted British audiences and so too did his invectives against Hitler – "this bloodthirsty evil guttersnipe" and his "Narrrzis".

Terry Charman reviews 'No More Champagne: Churchill and His Money' by David Lough

Biographies of the Greatest Briton abound. They range from the late Sir Martin Gilbert's multi-volume chronicle to the short but brilliant Churchill: an authentic hero by Piers Brendon. Most, naturally enough, concentrate on his career as a statesman and "the saviour of his nation" in 1940. Peter Clarke's recent Mr Churchill's Profession dealt with Churchill the writer and touched on the great man's money troubles and periodic financial crises, but it has fallen to David Lough in his excellent and original No More Champagne: Churchill And His Money to examine in fascinating detail the great man's finances. It is a most revealing book and essential reading for all interested in Churchill, his life and times.

"I have simple tastes; I am always satisfied with the best". Churchill was supposed to have said, and his great friend Lord Birkenhead confirmed this. His love luxury, of good food and drink, his gambling and often reckless spending, inherited from both parents, meant that for most of his life he often lived on a financial cliff edge. But what fascinated me, and I think will likewise fascinate most readers, is how, even during his "Finest Hour", Churchill was plagued with money worries. And the time he spent in trying to solve them.

Thus, in June 1940 as France is about to fall, Churchill learns that he is running out of money to pay his household bills, income tax and the interest on a large overdraft. As so often when faced with financial troubles, he turned to his faithful follower Brendan Bracken, who in turn approached Austrian-born banker and financier Sir Harry Strakosch. Sir Harry had already come to Churchill's financial rescue back in March 1938, and on 18th June 1940, the day after Marshal Petain asked for an armistice, Sir Harry came to the rescue again and wrote out a cheque for £5,000 (the equivalent of £250,000 today). The trail was effectively disguised by entering Bracken's name as payee, but the money reached Churchill's bank account three days later and as Mr Lough wittily puts it, 'Thus fortified, he paid a clutch of overdue bills from shirt-makers, watch-repairers and wine merchants before he turned his attention back to the war.'

Similar incidents and financial worries abound throughout Churchill's long life, and Mr Lough writes of them all in both a most readable and enjoyable way in this examination of the one of the very few aspects of Sir Winston's life and career that has hitherto been unexplored.

Terry Charman is a leading expert on Churchill and the Second World War. He recently retired as Senior Historian at the Imperial War Museum after working there for 41 years.

If you would like to discover more about Winston Churchill in the very places where he grew up, Terry leads our In Churchill’s Footsteps tour (21–24 September 2017).

View itinerary for In Churchill’s Footsteps 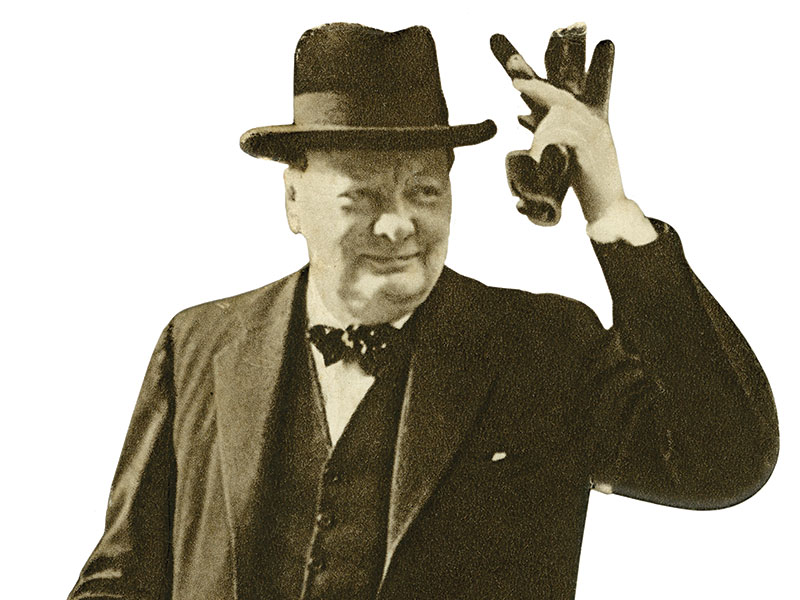